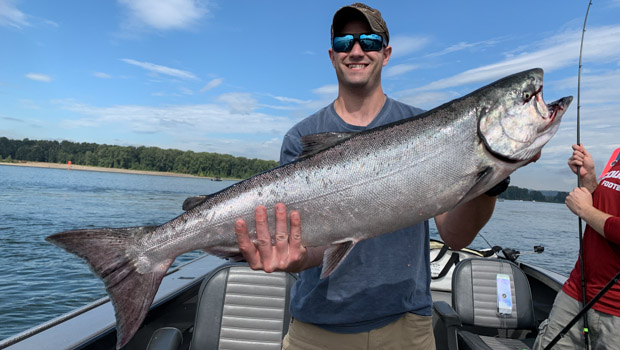 The non-selective coho ocean season opened up on August 31st on the central Oregon coast. This fishery allows anglers to retain both wild and hatchery salmon on Fridays, Saturdays and Sundays in September. During the first 2 days of the season an estimated 5,164 coho were landed, which was more than half of the original 9,000 fish quota. ODFW has added 6,640 coho as a roll-over from the marked selective season, for an updated quota of 15,640 coho. That will allow the season to remain open through this weekend and possibly the 13th-15th as well. After that, the focus will turn towards freshly arriving chinook where we’ll fish the Tillamook Bubble and Bay. The rivers get the attention when the rains arrive in October or November. There are lots of options to chase salmon through the fall in the Tillamook area!

The coho season on the Columbia River in Astoria is underway. It’s a chess game involving tides, conditions, salmon and other boats. It’s really a lot of fun and can provide quite a bit of action. Fishing has been really good this week and will just continue to improve daily as more and more coho head upstream. Normally we enjoy some beautiful end-of-summer days, and there should be plenty of fish to tug on the lines. All of this without the crowds! With the A and B Coho runs anticipated to bring over 600,000 to the Columbia River, we expect the next month and a half to provide some nice fishing opportunities. 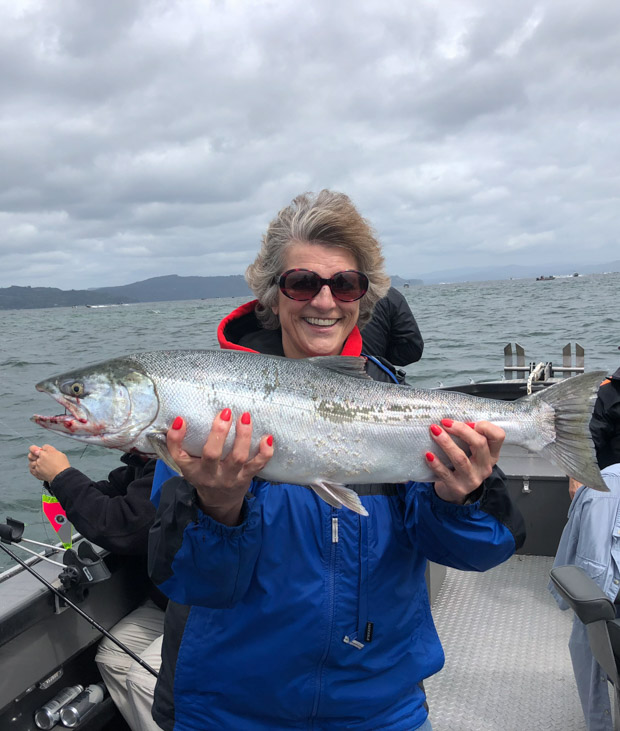 We have had some great days chinook fishing on the Columbia River near Portland by the Lewis River and also upstream near Ainsworth State Park. Today is the last day of the fall chinook season below Bonneville Dam, which means for those wanting chinook, we will move upriver. Our focus now turns to the stretch of the Columbia River above the Bonneville Dam, fishing near the mouth of the Deschutes River and the mouth of the Klickitat River. 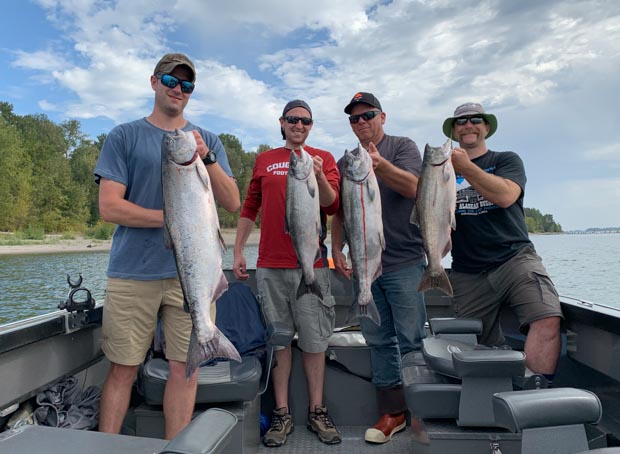 In the area known as the Bonneville Pool, there isn’t as much current as below the dam. We change up our fishing strategy to match the conditions. The chinook tend to hug the bottom, so we suspend a coon shrimp or egg cluster, a reel click or two off the bottom. That puts the bait right at the chinook’s eye level. The bait drifts directly below the boat. This type of fishing is called hover fishing and it’s one of my favorite techniques. The process and action are unique in every way. Even the bite is different as the 20+ lb chinook gently mouth the bait. They play with it, spit it out, and suck on it. Patience is the key and there’s a lot of action going on under the surface before it’s time to set the hook. Yes, I went off on that technique, but flashers and spinners still catch a bunch of fish. The bottom line is, we do what it takes to catch fish!

With a better than anticipated return to the Columbia River, we’re super excited about the chinook fishing on the Lewis River. Add in this year’s large coho run and the fishing gets ever better. The daily limit is 6 total salmon, with up to 4 of those being adult salmon: a maximum of 2 hatchery chinook with remainder being hatchery coho. Hatchery jack chinook and coho may also be retained to reach the 6 fish limit. Looks like we’re going to have some nice opportunities to fish for salmon this month. When October rolls around, wild chinook may also be retained as part of the daily limit. That gives us even more opportunity to keep fall salmon. The Lewis River is an active fishery, with beautiful scenery, and we expect to be fishing it for salmon through Thanksgiving.

As always, let us know if you have any questions or are ready to book a trip. We’re here to help get you out on the water.