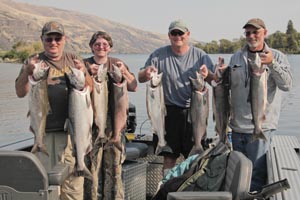 Short sleeve weather and a limit of Fall Chinook on the Klickitat.

Klickitat River fishing can be simply described as world-class. The Klickitat River is a Columbia River tributary that  originates out of Mt. Adams in South Central Washington.  Over 100 miles, the Klickitat gains size and speed and ultimately dumps into the Columbia River at the town of Lyle.  On the Oregon side, the river would be oriented slightly east of Hood River and west of The Dalles.

The river hosts runs of native and hatchery steelhead, Spring Chinook Salmon, Fall Chinook Salmon and Coho/Silver Salmon.  The river is heavily stocked by the tribes and offers some incredible fishing as a result.

Although the Klickitat has Steelhead and Salmon in it much of the year, the fall Salmon fishing is the main attraction.  I fish at the mouth of the Klickitat in the Columbia River during September and sometimes into October.  These are the same Fall Chinook Salmon that we were catching in Astoria just a few weeks before.  These fish waste little time getting up the river and by the time I’m done in Astoria, it’s game time at the Klickitat. 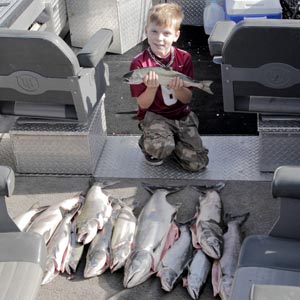 A pile of Klickitat Fall Chinook.

The fishing I do at the Klickitat is very much enjoyed by my clients due to the hands on nature of the fishery.  Experienced fishermen will enjoy that fact that you actually get to “fish” and less experienced anglers will actually walk away from the trip knowing how to “fish”, at least at the Klickitat.  This “hands on” fishing really makes for some fun days as there’s typically
enough fish around for plenty of success and even the occasional failure that is certain to encourage a little ribbing from your  fishing friends.  All in all, the Klickitat Fall Salmon fishing is some of my favorite fishing of the year.  My guess is, that it will become one of your favorites too.

The Klickitat is a short, hour and twenty minute drive from Portland, which makes it an easy drive the morning of.  Many of my clients will also stay in The Dalles and Hood River which are each only about 10 minutes from where we launch on the Oregon side.  Should you need to be picked up on the Washington side in Lyle, I can certainly make that happen.  The ramp on the Oregon side is just a bit more conducive to launching my 25 foot Raptor, but the ramp in Lyle is right next to where we fish and it’s no problem pulling in to grab a customer.

Don’t hesitate to contact me for questions or to simply book a trip.