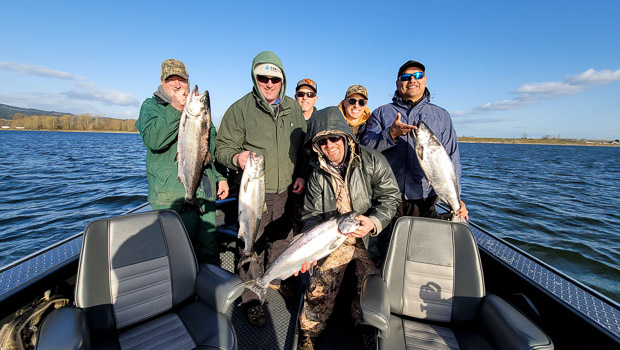 April in Oregon brings blooming cherry trees and Spring Chinook fishing. April 6th was the last salmon fishing day of the season on the Columbia River, and with that, both our focus and the fish are shifting to the Willamette River, which runs right through the heart of Downtown Portland. We fish various stretches of the river, from Oregon City to the Multnomah Channel, near Sauvie Island, moving as the fish move. Whether you’re a local or are visiting from out of town, a day on the water allows you to relax and see the Portland area from a unique perspective.

Springer Fishing on the Willamette River is one of my favorite seasons of the year. The weather is warming up, there are Salmon throughout the system at this point, and I get to spend the day on the water in one of the most incredible metro fishing locations in the world. The last few days have unsurprisingly brought us the best fishing of the year. I’m not going to go so far as to tell you where on the river and with what, but it’s been pretty good. The spring weather has had warm days and some late snow, which means we have a ton of snow pack.

Salmon aren’t the only species of fish that we target during the spring months. It’s also prime time for sturgeon fishing on the Willamette River. Many Columbia River Sturgeon spend a large chunk of the year in the Willamette River, and springtime is a great time to battle these beasts while catching and releasing all day long. Who will win…man or monster fish?

If you’re looking to add a little diversity to your day, we offer combination trips that include Willamette River Salmon and Sturgeon fishing. We chase salmon on the incoming, and sturgeon on the outgoing as ocean tides affect us even in the Portland area. Combo days provide an opportunity to chase some salmon and also battle some big fish. What could be better?

If catch and release sturgeon isn’t enough for you, get your reservation in for this year’s catch and eat (keeper) sturgeon season in Astoria. The season opens up on May 11th and runs through June 4th on select days. These once-a-year trips do book up quickly, so let us know if you would like to get on the calendar.

Let us know if you have any questions or would like to book a trip. We’re always willing to help in any way we can.