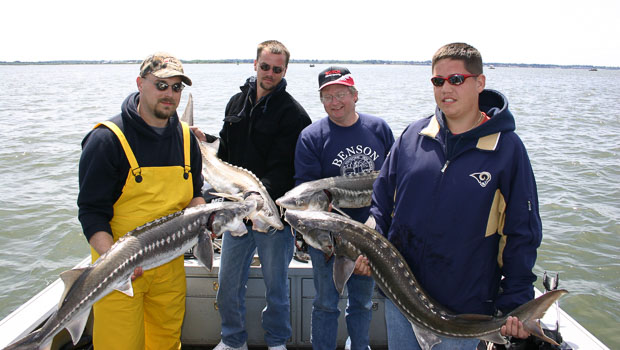 Today the ODFW/WDFW Joint Compact added 2 more dates for Astoria sturgeon retention. These additional dates are Wednesday, June 8th, and Saturday, June 11th. All other previous regulations, as described below, remain in place.

It’s finally here! The day we’ve all been waiting for with anticipation. The 2022 Columbia River Keeper Sturgeon season in Astoria has been announced and will take place from May 11th through June 4th, on Wednesdays, and Saturdays, with a 2 pm end time each day. Retention will also be allowed on Monday, May 30th, which is Memorial Day. As usual, it’s a short season and we will be taking full advantage of every day that we’re given. June 4th is also a free fishing day! This year’s keeper sturgeon legal catch size is 44-50”, measured from the nose of the fish to the fork of the tail, with a 1 fish daily limit. Battling these prehistoric fish provides an epic day all on its own, but taking that catch home for dinner brings a whole new element of satisfaction.

We’re excited to have a keeper season in the Columbia River Estuary  again this year. As the water begins to warm up in the estuary, sturgeon from all over converge to gorge on the bait fish that have arrived. It’s an exciting time in Astoria. Keeper sturgeon are typically 20-40 lbs, which will provide many delicious meals. Smoke it. Grill it. Fry it. Kabob it. Do whatever you like. The firm, white, boneless flesh from a sturgeon can be used in almost every way imaginable. Come join us to wrangle some fish!

The fun doesn’t end on the Columbia River or in Astoria when retention ends on June 4th, we simply shift gears to our Astoria Trophy Sturgeon season, one of the most action packed fisheries of the year. We’ll be fighting these fish through July, where anglers of all ages and abilities can take on big fish on light gear. Sometimes we’re in 3-6 feet of water, and it’s not uncommon to see sturgeon launch out of the water as you’re reeling them in. There’s no other fishing experience like it in the world, and once you’ve taken part, you’ll be hooked.

With only 9 days of keeper sturgeon fishing on the Columbia River, these trips will fill quickly. Questions? Ready to reserve your seat? Let us know how we can help!