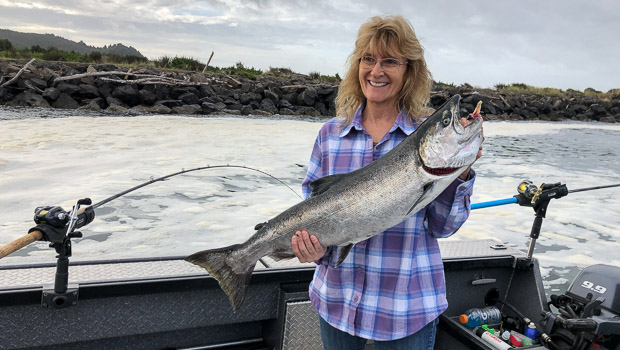 We’re halfway through October and the Pacific Northwest continues to provide multiple opportunities for Fall Salmon fishing. We’ve been fishing on the Northern Oregon Coast, in the Portland area on the Lewis, and in the Columbia River Gorge, but the Columbia is winding down for the year. While the sun last week was appreciated by anglers, the recent rains have increased water flow in the rivers, which lit a bit of a fire into our migrating fish. It looks like the rains end tomorrow, and we expect to have some pleasant fall weather for the foreseeable future.

We’ve had two significant rains to this point and there could be a third depending on the current system. It’s safe to say that we’ve got fish throughout the system. Fish are already up the Trask, and fish are showing up now in the Wilson River. We’re going to be moving between the bay and rivers as water levels come and go. We’ll be fishing in our big sleds in the bay and the smaller sleds and drift boats in the rivers and tidewater. We’ve got a lot of fishing to do the next month and a half, and are excited to be on some of the larger fish of our fishing year. 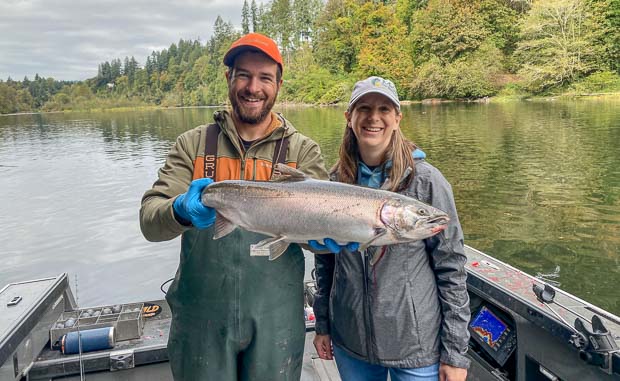 Friday brought about a big change on the Lewis River, and it’s a good one. Due to our dry and warm summer that extended into fall, water flow on the river had been holding steady at 1000 cfs, and the river was pretty low with the gauge at 1.5 ft. We were out fishing on Friday, and after catching our first Chinook around 9 am, the water level began to rise. PacifiCorp had increased flow at the dam, and we couldn’t have been happier. As the water level rose, some of our favorite fishing holes in the river became accessible to boats again. We moved downriver to continue targeting Chinook and Hatchery Coho with eggs. We did a lot of hover fishing but also did some back-bouncing and back-trolling with divers. Salmon prefer moving water and the bite picked up as the flow increased.

The rains over the weekend increased the flow and water level in the river even more, which is great news for anglers. There are plenty of salmon in the river and we can use more techniques to target them when we have more water to fish. Last year we fished the Lewis for Fall Salmon through Thanksgiving, and we’re hoping to do the same this year.

Let us know if you have any questions or would like to book a trip. We’re here to help you in any way that we can.