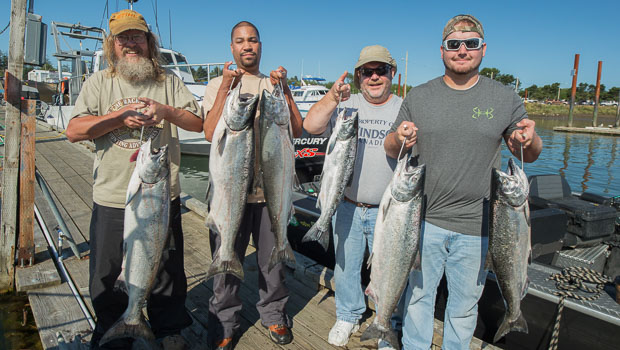 Astoria is a pretty unique place when it comes to fishing. During the year we have opportunities to fish the salt water of the Pacific Ocean, the fresh water of the Columbia River, and a mixture of both in the Columbia River Estuary. Things are a bit fluid due to COVID-19 right now, and we know that a lot of people are looking forward to getting out on the water to fish. We’re planning guided fishing trips and private fishing charters for summer and fall as normal and will adjust if needed. When you’re off the water in Astoria there are local restaurants with delicious food, comfortable places to stay, and lots of sights to see.

20 years as an Astoria Sturgeon fishing guide has provided me with a lot of fond memories and I can’t wait to make a few more! We’re waiting for the official announcement of the 2020 Keeper Sturgeon season. I’m not ruling this out. I’ll just say if there is any way they can make a season, they will. The past few years, keeper sturgeon legal catch size has been 44-50” measured from the nose of the fish to the fork of the tail. That’s a nice sized fish to take home! Stay tuned and we’ll let you know as soon as ODFW announces the Keeper Sturgeon season. If you want to get on our list, just let us know and we’ll get you down.

While the 2020 Ocean Salmon season hasn’t been officially set yet, it typically opens up the last week of June and lasts clear through the Buoy 10 season. The ocean season allows us to target both Chinook and Coho Salmon as they gorge themselves on bait fish before beginning their runs up the Columbia River. Our guided fishing boats offer exceptional maneuverability which allows us to move around freely as we give our customers the best opportunity to reel in some fresh salmon straight from the Pacific Ocean. Our fishing charters are private and we fish between 4 and 6 anglers per day.

“What an epic battle.” “That is incredible!” “Did you see that huge fish jump?” These are just some of the comments that we hear during Trophy Sturgeon season on the Columbia River. As soon as the keeper season ends, the trophy season gets underway. What makes this fishery so special is that we rig up with light tackle to wrestle these prehistoric beasts in sometimes as little as 4 feet of water. When a 6-8 foot sturgeon makes a run for it, it often leaps clear out of the water, which is definitely a sight to see. Since a picture is worth a thousand words, we made a little video for you last summer. Take a look…

Astoria is probably best known for its Buoy 10 Fall Salmon Fishery. This season’s Buoy 10 season is a bit later than typical, with the Columbia River opening up for Chinook and Coho Salmon fishing on August 14th. After the Chinook season closes on August 27th, it becomes a Coho Salmon show in Astoria through September. Astoria is a special place because every salmon that is heading up the Columbia River has to funnel through its mouth at the corner of the Oregon Washington border. Astoria comes alive with a palpable energy during the Buoy 10 season as anglers unite together with their sights set on salmon. Here’s a look at some of the fun we have…

Let us know if you have any questions or are ready to book your trip. We’re always happy to help.