Home » Fishing Blog » Tillamook County Ocean Salmon: You Catch It, You Keep It!

Tillamook County Ocean Salmon: You Catch It, You Keep It! 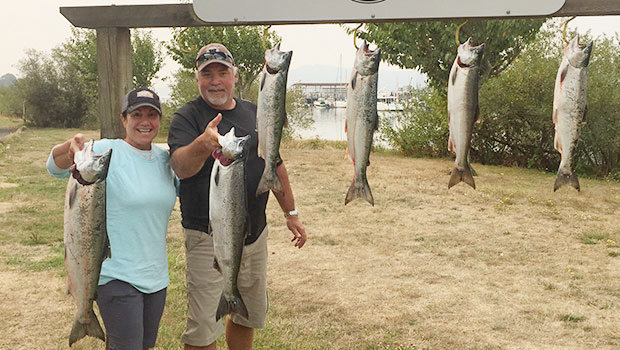 As we wrap up yet another fun and exciting Buoy 10 season, we have started to disperse here at Lance Fisher Fishing. Some guides went up stream, other will go even further, others have stayed in Astoria to coho salmon fish, while others are already starting to catch fish in Nehalem and Tillamook Bay. This September, we have a great opportunity coming up in the ocean out of the Nehalem and Tillamook bays: a non-selective coho salmon opener!

Most years, coho salmon must be fin clipped (hatchery) to be caught and retained in Oregon. By in large this is for the whole state, including the ocean and the vast majority of rivers. This September, however, we have been given an opportunity to harvest some wild coho in a non-selective salmon fishery. Non-selective basically means that any salmon is a good salmon to catch and keep. Chinook will be open in the ocean as well, meaning with a two fish limit you can keep whatever two salmon you catch. Fins clips and species do not matter! This should be a great opportunity to put some meat in the freezer, as wild coho are generally plentiful.

The season opened last Friday, September 10-12th and will be open for retention 7 days a week from September 17th until September 30th, or until the quota of 13,984 coho coho is met. How fast the quota fills up depends a lot on ocean conditions and whether the fleet can get out into the ocean each day the season is open. Our wild coho populations have rebounded nicely since a crash from commercial fishing a couple decades ago, and we are starting to see the rewards. Not only is ocean-caught coho great table fare, but these September fish tend to run big, with coho averaging between 8-15 pounds and 20 pounders caught each year. We’ve already seen some very big coho off of the Columbia in early August, and these Tillamook fish should be even bigger!

Opportunities like this are not common, and have the potential to make for a great day on the water! Besides Lance, we have a few very good fishing guides who live in the Nehalem and Tillamook areas ready to get you on the water! Feel free to contact us for booking information, or even about where to stay and eat during your time on the coast!