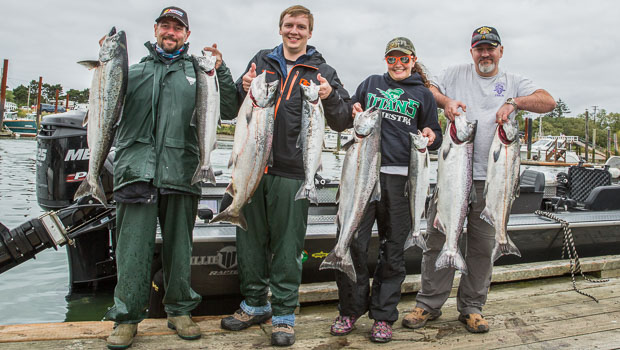 This is the time of year when Buoy 10 Salmon and ocean abundance numbers for Astoria begin to get tossed around. While numbers aren’t official, I’m hearing some really good things for this year’s possibilities. Like, REALLY good things.

I’ll start with Chinook. We’re looking at a Preliminary Forecast of about  500k Chinook for 2022. That’s a huge deal for sure as I’ve seen some pretty cataclysmic fishing at 400k. I mean Richter scale rattling fishing. Like, can’t get all your rods in the water as you’re rolling through the Red Roof, Church, and Tunnel. Yes, that kind of fishing. If you were out on the water last fall, you know what I mean. 500k should get us a full season, and what I mean by this is the season could open on August 1 and get us through Labor Day. Will there be a few days in the peak where the powers that be try to put the brakes on the catch rates? Yes, but five weeks of Chinook Salmon fishing in Astoria is a very real possibility at this point. But there’s more to the story.

What I’m hearing now is a forecast about 1 million Coho returning to the Columbia. Will it end up there? We’ll see, but in over 20 years of following and letting people know about Buoy 10, I don’t think I’ve ever had bad info. This number feels uncomfortable, because it’s just so big. Up until last year’s season, we had to go back to the early 2000’s in order to really compare this forecast to anything. It’s been that long! 1 million returning Coho would mean our ocean season in July and early August is going to be fuego. Serious fuego. Like carnage asada type fuego. For a lot of folks that have never seen what this looks like, you’ll get the opportunity this year and I seriously can’t wait. And the action doesn’t slow down once the Coho get to the Columbia. We’ll just keep targeting bright silvers clear through October in Astoria. Coho fishing and crabbing…what a great way to spend a fall day on the water.

So expect our Summer Salmon fishing leading up to Buoy 10 to be incredible. The ocean should open around the 25th of June. Just guessing, but it should be in that neighborhood. With decent forecasts of Summer Chinook and 1 million Coho, it should be game on from the get go. Yes, we have conditions to deal with, and who knows where the cold water will be during the summer, but given the opportunity to get out, we should be able to enjoy some pretty incredible fishing.

I’ll keep you all updated with what I’m hearing. The official season dates and details should be announced in April. Let us know if you have any questions or would like to book a trip. We’re here to help in any way we can.