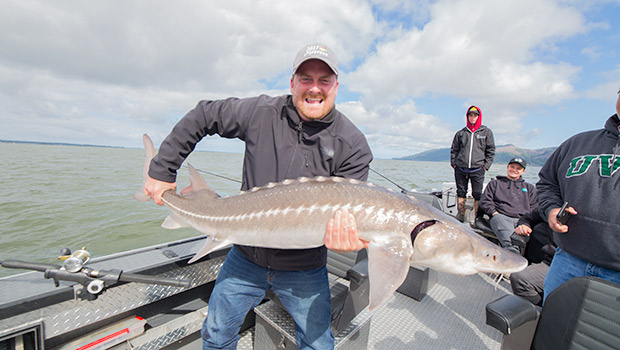 Now through the first week of August may see some of the most action-packed days of sturgeon fishing of the year. We have 3 more weeks of Trophy Sturgeon fishing on the Columbia River in Astoria before we switch over completely to fall salmon fishing at Buoy 10.  Over the weekend we had a blast, landing sturgeon after sturgeon in as little as 5 feet of water. Often, we’re fishing so shallow that our motors are kicking up mud when it is time to leave for a new location. It doesn’t get much better than that! Let us know if you would like to get out and chase some monster fish. This is an experience you’ll never forget.

Tarpon of the NW

When many think of sturgeon, people often think of a dinosaur-like fish slowly swimming lethargically in a deep dark hole.  When people think of tarpon, they think of reel screaming runs and six foot fish flying out of shallow water. It turns out both assumptions can be true. However, in the Columbia River Estuary, conditions align during June and July so that we see sturgeon flying out of the water like tarpon! What’s the only difference here between a tarpon and a sturgeon? Our sturgeon are generally bigger!  The fishing we do in Astoria, Oregon includes many great types of fishing, but the sturgeon fishing on the Columbia River may be some of the best fishing in the whole region, and definitely the best sturgeon fishing on the Columbia River.

Here at Lance Fisher Fishing we try to keep you up to date on what’s going on in the Northwest, so follow us on Facebook, Instagram and Twitter to stay up-to-date on our fishing opportunities!

In June and July, sturgeon migrate not only from the upper Columbia and Willamette Rivers, but also down from Canadian Rivers, filling the estuary with what very well might be the single biggest concentration of sturgeon in the world.  The anglers, however, do not fill the river. The reason? All fishing is catch and release. While I will not deny that keeping a sturgeon could lead to some tasty meals, I will also point out that this is more of a trophy fishery. The mirror between these sturgeon and tarpon is again in-line.  You don’t often see pictures of tarpon hanging dead in someone’s hand, and you won’t see that in July with Sturgeon in Astoria. The draw is the fish themselves. It’s the opportunity to fight a true trophy fish–that could easily top out at over 9 feet long–in shallow water.

The sturgeon during June and July are big…”big” meaning an average of four to seven feet, with fish over eight feet not uncommon.  They congregate in the estuary to feed on the millions of anchovies that school up in the area. During each tide sequence, the sturgeon will rise up with the incoming tide onto the flats, feeding on anchovies and sand shrimp.

As the tide recedes, so do the sturgeon, not wanting to be left high and dry. What makes this fishery special is that we can target them on these flats, often in only a few feet of water. As numbers build, you often see sturgeon tailing in the shallows or surfacing just off of them.  This is where boat positioning is critical, and can turn your 15 fish day into a 40+ fish day. The way we position our boats allows us to target the sturgeon actively feeding on the flats. With one side rod, we target the fish on the flat, while our back rods target fish sliding off the flat, and our outside rod targets fish that have slid off the flat.  Covering all these bases ensures success. More fish see your bait, which means more fish to tangle with! 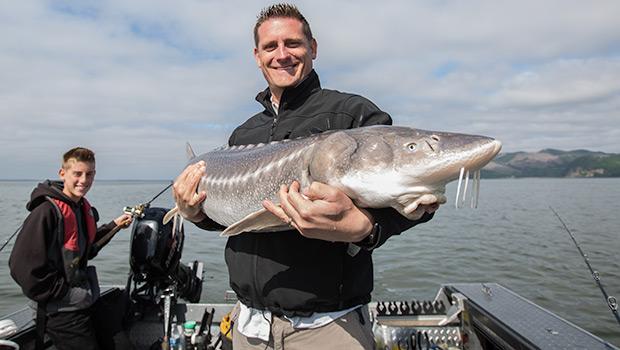 I often anchor my boat in as little as three feet of water. My rods closest to the sandbars might rest in only a foot and a half of water.  This is where the magic happens. Setting the hook into an eight foot sturgeon in two feet of water is not something you will soon forget!  Fish make screaming runs, trying to find deeper water once they are hooked, and often leap completely into the air trying to do so, leaving you holding on for the ride.

Big fish in high volume is what makes this fishery truly special.  We offer these trips into the first week of August, and they can be made into a sturgeon-salmon combo beginning in late June, ocean conditions allow. Come see how similar these fish are to tarpon and decide for yourself!

Looking to come fishing in Astoria? Call us or email us. We’re here to help answer any questions and help make your entire experience as awesome as possible.