2014 Columbia River Coho Salmon Season is Forecasted to be Exceptional 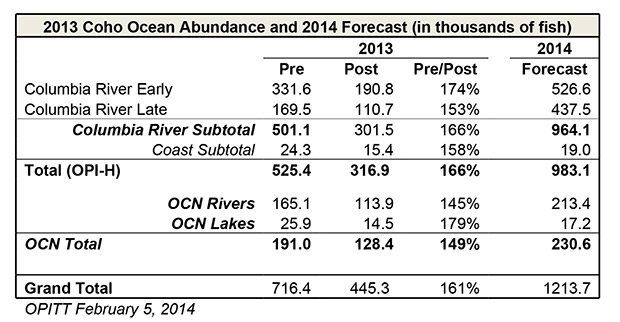 Walking around the Sportsman Show this past week, a friend of mine walked up and shoved a phone in my face. “Look!”, he said as I began scanning through a document that he had pulled up on his phone. It was the forecast for arriving Coho to the Columbia for 2014 and I was looking at big numbers. Numbers that make us smile for about two months as the A and B run of Coho move through the Columbia.

The 2014 Columbia River Coho Salmon season is forecasted to be exceptional.

So what does it mean?

For Buoy 10, it will provide us with opportunity that we really haven’t had much of the last couple years. We’re likely to see some pretty special fishing with the combination of abundance that we’re going to see. Chinook will show up early, but Coho will begin making their way into the river about the 20th to the 25th of August. By that time we’ll have a river full of Chinook and a whole lot of aggressive Coho to make our days that much more interesting.

Additionally, when we arrive up river to fish the Klickitat in October, the B run coho that are slated to return should provide us with some pretty fun opportunities as well. Last years run of Coho wasn’t big, but we still caught a bunch of fish. Having three times as many fish may provide more fun than a bunch of guys can handle.