Astoria is the place to chase salmon in August as they head from saltwater to freshwater. We’re moving into Coho Salmon Season now and it’s going to be action packed. The Coho have been putting on weight out in the ocean and are as aggressive as ever. We’ve brought in limits on the days we’ve gotten out on the ocean, and are anticipating more days of full boats as the season progresses.

We’re still about a week out from the bulk of the Coho entering the Columbia River and that’s when it really gets fun. Lots of big coho, fresh from the ocean, tugging on the lines. Add to that some great battles with 25 lb Chinook, which must be released, and you have a busy day on the water. With over 600,000 Coho forecasted to run the Columbia River this fall, we’ll be fishing for Coho in Astoria through September and most likely into October. That’s a lot of days of salmon fishing.

If you’d like to target Chinook Salmon, we can keep these 15-25lb fish farther upriver. As the salmon move up the Columbia River system, so will we. We fish where the fish are 🙂 Chinook fishing on the Columbia River in the Portland area and up to the Bonneville Dam will start up toward the end of August and run through September 8th. That overlaps fishing near the Klickitat River, where we’ll go after Chinook the first few weeks of September or as long as it is left open. We will be fishing the Lewis River, for Chinook and Coho from the third week of September through Thanksgiving. With lots of Salmon heading up the Columbia River we have a busy next few months!

Coho salmon fishing in the ocean outside of Tillamook and Nehalem Bays continues to be productive. Starting August 31st, we’ll be able to retain wild coho as the non-selective coho season arrives. The season is open Fridays through Sundays until September 30th, or earlier if the quota of 9,000 wild coho is met before then. This year’s quota is almost triple last year’s quota of 3,500, due to larger forecasted numbers of coho. If you’d like to go after wild coho in the ocean, the best looking tides are the weekend of September 6-8. 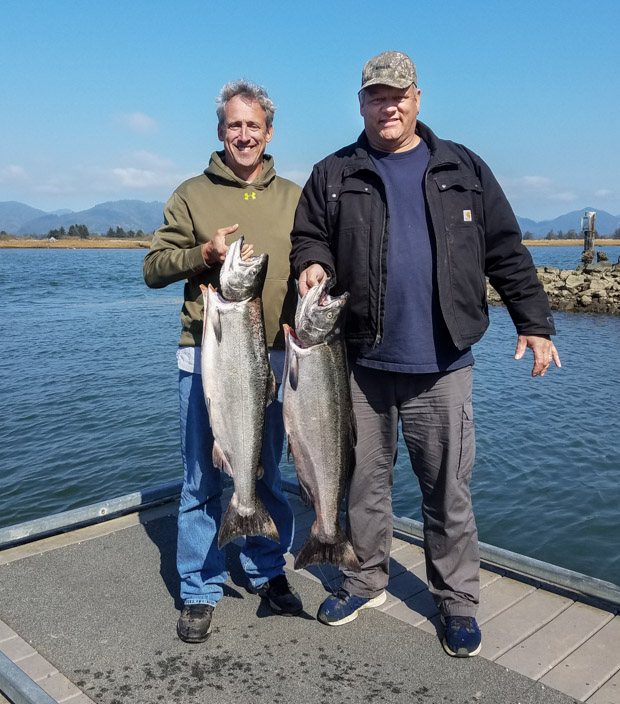 Chinook Salmon in Tillamook are moving into the ocean around Garibaldi. Some nice 25+ lb fish were caught in the jaws of the bay and even in the bay in the past week. It’s actually a little earlier than they usually appear. As always, we’ll chase them as they move from the ocean to the bay, through the tidewater, and up into the rivers. Coho salmon will join the mix as they begin entering the fresh-water system in mid-September. There are some great looking salmon tides to start off the season September 22-25 and then again October 3-9. We’ll be fishing for salmon in Tillamook from now through Thanksgiving, including 2-3 person drift boat trips on the rivers starting the third week in October. Sometimes we get a small salmon run in December when the steelhead begin their run. All in all, it’s looking to be a good fall salmon season.

Let us know if you have any questions or would like to book a trip. We’re happy to help you find the perfect chartered fishing trip to meet your needs.