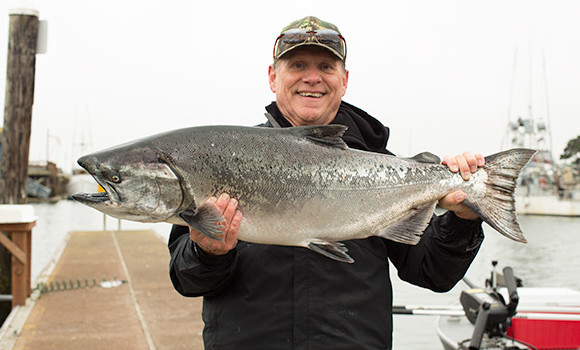 Oregon is a vast, wide-open western state with incredible diversity and beauty. Visitors find forest-covered mountain ranges, big, sweeping desert vistas, and ocean beaches swept with surf. The western half of the state is covered in thick forests of fir and cedar that climb rain-washed mountains toward high, snow-covered volcanic peaks. This verdant landscape, with its rugged beauty and vaunted runs of salmon and steelhead, is what most visitors have in mind when they arrive in the Beaver State. Over half of the state however, is high chaparral, desert uplands of sage and juniper that spread over the bench-lands and plateaus abutting mountains clad in Ponderosa pine and Oregon oak.

A rugged coastline pushes against the Pacific Ocean, where nutrient rich waters well up against rocky headlands and broad beaches. fish of all kinds feast on the ocean’s largess. Halibut, ling cod, rockfish, surfperch, albacore tuna and much more join Oregon’s signature fishes, the renowned Chinook and coho salmon. Anglers and guides target these fish in the ocean, bays and rivers of the state.

From the ocean to the high desert, great fishing abounds. Legendary anglers have long flocked to Oregon to sample the incredible fishing. Pioneers such as the writer Zane Grey explored Oregon waters,  and left behind their knowledge as guides for present day fishermen.

The names of Oregon rivers are synonymous with great fishing. The Columbia, Rogue and Umpqua are just a few of the best, and there are many other storied names that conjure up thoughts of tight lines, screaming drags, and big, powerful, silvery fish.

What follows are some quick fishing guides to the fishing opportunities that I offer in Oregon.

Oregon’s largest city is conveniently located at the junction of two famous salmon rivers, the Willamette and the Columbia. Fantastic fishing can be found right within the city’s limits, and it is a great jumping-off point for all of northwest Oregon. Fishermen ply the local waters seeking Chinook, coho, and sockeye salmon, as well as steelhead and sturgeon. In addition to the big rivers, smaller tributaries like the Sandy River and the Clackamas River offer fine fishing for salmon and steelhead. Hiring a guide can quicken the learning curve for anglers new to the area.

Portland offers anglers and visitors all the comforts and sophistication of a large city, with fine eateries, pubs, theatres, museums, live music, and quaint neighborhoods. With snow-covered Mt Hood in the background, and surrounded by fir-clad mountains, it is a city with an incredible view.

Portland’s signature river, the Willamette is best known for its run of spring Chinook salmon in April. These salmon are coveted for their fine fillets and dogged fighting ability, and they draw anglers from the world over. Prehistoric white sturgeon over-winter in the Willamette, offering fishermen the chance to tussle with one of the world’s largest freshwater fish. All of this takes place within the center of Portland, and when anglers come off the river the eateries and lodgings are just a short walk or drive from the boat ramp.

Steelhead, both winter and summer runs, pass through the lower Willamette, and in the fall coho salmon arrive in great numbers.

The town of Hood River sits on the banks of the Hood River itself where it empties into the Columbia River. It is a picturesque, bustling small city that is a very interesting mix of shops, restaurants, coffee shops, brewpubs, and quaint lodgings that supports a culture based on adventure sports. Kayaking, wind surfing, boating, and mountain sports all vie with the fishing for attention.

The Columbia River provides action for salmon and steelhead, and sturgeon. The nearby rivers such as the Hood River, Klickitat River, and the White Salmon River all provide plenty of opportunities for tight lines. The mouths of these rivers are where the salmon bunch up, and guides and fishermen work the schools. And, it’s all just a short run from the city’s boat ramp.

Nearby Drano Lake, at the mouth of the Little White Salmon River, is another hotspot for salmon and steelhead from spring through fall.

The Dalles was once little more than an industrial town that serviced the boat and barge traffic along the Columbia River. It is now a high-tech mecca, with service centers for Google and other companies. It has a bustling downtown and quaint neighborhoods scattered along the bluffs overlooking the Columbia River.

Fishermen, guides, and others use the town as a center for fishing the nearby John Day and Deschutes Rivers, as well as the Columbia itself. Salmon and summer steelhead are the main draws, and the boat ramps are busy in summer and fall. In September and October the mouths of the Deschutes and John Day Rivers attract huge schools of Chinook salmon. The fishermen that target these schools do exceptionally well, and the catch often includes Chinook over 40 pounds.

The Buoy Ten fishery takes place near this quaint port town near the mouth of the Columbia River. Named for a buoy at the mouth of the river, this world-class fishery takes place in early fall when huge runs of Chinook and coho salmon swarm into the estuary from the ocean. Running in and out with the tides, the schools of salmon feed hard on anchovies and other baitfish before moving up the Columbia to spawn, and the fishing can be incredible.

The small town comes to life when the runs are in, and the hotels are booked full of guides and their clients. Book rooms in advance if you want a place to stay.

The town is home to a fleet of charter fishing boats that target ocean schools of salmon, tuna, rockfish, lingcod, and halibut. Ocean salmon seasons have been generous lately, and when albacore tuna come close enough to the coast, the charters and guide boats spend long days offshore raking in these line-burning, eager-biting fish.

Astoria is also known for clamming, crabbing, and white sturgeon fishing. Once a rustic sea-port town it has blossomed into a small city with an interesting culture. The seafood shops have been joined by bistros and fine dining eateries, as well as theaters, museums, and a vibrant pub scene. The anglers and guides that fish the Columbia find a wide range of lodgings in Astoria, with fine hotels, B and B’s, and budget lodgings.

Five salmon rivers feed this bay along Oregon’s north coast, and the inshore waters of the bay can be outstanding fishing. Popular spots such as The Jaws and the Ghost Hole are legendary for their king salmon catches. Both spring and fall Chinook return to the bay, but it’s the fall run that generates the most excitement. These are big salmon, averaging about 20 pounds, and specimens topping 40 pounds are not uncommon.

In addition to the fall and spring Chinook, there are good runs of coho salmon and Chum salmon as well. The rivers of the bay are also home to some of the best steelheading in Oregon during the winter and early spring, and when the fish are in drift boats work sections of the Wilson, Trask, and Miami Rivers. The Tillamook and Kilchis Rivers also provide god fishing for kings, chums, and steelhead.

Rockfish and lingcod can be caught in the bay, and they provide a good fishery for the few times of year that the salmon are absent. Crabbing is also excellent in the bay, and most guides offer crabbing along with their salmon trips.

This bay on the southern Oregon coast collects the waters of the Umpqua River, one of Oregon’s most legendary salmon and steelhead rivers. The bay is home to a flotilla of charters and fishing guides that target the ocean and the bay, and most of them are after king salmon. But, ocean and bay fishing is also good for coho salmon, rockfish, lingcod, halibut, and offshore albacore tuna.

When you add the fishing for spring Chinook as well as winter and summer steelhead in the river itself, it becomes obvious why this section of the Oregon coast is so popular with fishermen.

Still, it is the fishing for coastal kings that makes this area great, and whether the big salmon are feeding in the ocean or the bay, the fishing, and catching, is legendary. These are some of the largest king salmon in Oregon waters, and giants of over 50 pounds rarely raise an eyebrow here.

The towns of Reedsport and Gardiner provide everything an angler needs in the way of lodgings, restaurants, and gear. The nearby beaches provide entertainment for non-fishing travelers, as does the Oregon Dunes National Recreation Area. Guided dune buggy rides make for an interesting way to explore the expansive dunes and beaches.