All Hatchery Fish Can Now Be Kept at Buoy 10 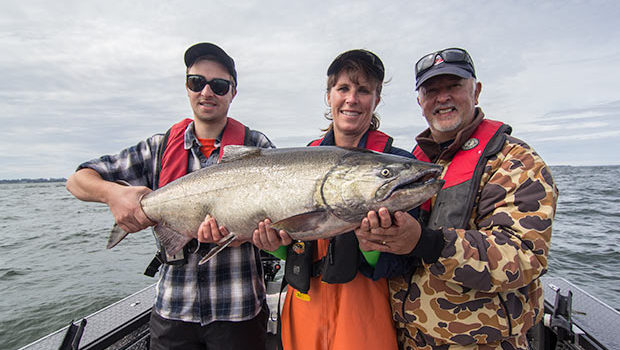 Everybody knows that Sundays and Mondays at Buoy 10 are hatchery only. Don’t get me started on why with a million fish returning we need to have such restrictions, but rules are rules. On the bright side, with so many returning Chinook, the folks fishing on those days may end up with the biggest bang for their buck. It’s likely 1 fish limits of Chinook (2 fish total, 1 fish can be a Chinook) will take four fish per rod to get it done.

One of the rules that’s been super difficult to swallow is the rule defining hatchery fish. Up until today’s announcement, many hatchery fish were going to end up being released.

The Rogue River stock of hatchery fish headed for Youngs Bay are actually left ventral clipped and still have their adipose fin in tact. While still a hatchery fish, a rule in the ODFW regulations stated that hatchery fish are identified as adipose clipped fish. This would mean that  by omission  a ventral clipped fish would not be considered a “hatchery” fish and must subsequently be released. With two days of hatchery only fishing, this was of course hard to pallet. To think that a fishermen must release a hatchery fin clipped fish is totally counter intuitive, and in today’s times, strange indeed.

1/2 @lancefisherpdx – The new rule that takes effect to start fall season on 8/1 will alter the hatchery fish definition to allow it.

(Please excuse the pectoral reference in my Twitter conversation. It is the ventral fin that we’re talking about.)

According to the ODFW and others, the reason behind the omission was to protect returning Rogue stock fish. Managers of the Youngs Bay fishery indicated that they were concerned about meeting escapement goals and as a result, pushed for this clause. The concern being that Rogue fish, because they are an out of basin stock, would not be allowed to be reintroduced should the program need more eggs from the Rogue River. Of course today’s hatchery management rules don’t allow for many of the out of basin practices that used to assist managers in structuring runs, so the concern is legitimate if indeed escapement goals are an issue.

Robert Moxley who sits on the Columbia River Citizens Advisory Panel, as far as I know, was the first to question this rule publicly. His concern being that releasing hatchery fish would inherently force anglers to handle more ESA listed Columbia River Salmon. This of course made sense to nobody except the commercial guys looking to catch what they can and the elements in charge of keeping Rogue stocks in tact (This subject needs a blog post in and of itself as the current rule that prohibits out of basin stocks is one of the dumbest constraints ever put on fisheries managers).

As an aside, I don’t begrudge Columbia River gillnetters. These guys are being pinched just like sport fishermen, but worse. Because of this, they are going to be grasping at everything they can in the years to come. They have been promised a lot since the bi-state agreement went into play and very little has happened to insure that there is no economic harm done to the commercial fleet. Economic harm means fewer fish and it’s in all of our best interest to make sure that the commercials are getting enough fish, through broader safe area supplementation. Their peril is ours. If you don’t know what I mean, then you’ll just have to trust me when I say that.

Back to the subject:

So in a nutshell, the states have agreed to allow the keeping of any clipped fish beginning August 1. The problem is for fishermen is that fish are salready showing up. Good news for sure, but there are going to be some fish released that should be sitting on the barbecue. I guess my question is a bit nit picky, but if we really aren’t catching fall Chinook until August 1, what’s the hubub over catching a few fin clipped late summer fish?

2/2 @lancefisherpdx – they don’t normally show up in such big numbers this early. Was not an issue we expected.

I’m looking forward to the start of another season in Astoria as my fall Salmon fishing clock awakens. It’s a great time of year and it looks like we’re off to a good start. Let me know if you’d like to get out and do some fishing this fall. We’ve got a lot of opportunities heading our way. Call 503.488.5988 or email astoriafishing@lancefisherfishing.com if you’d like to get on a guided fishing charter.