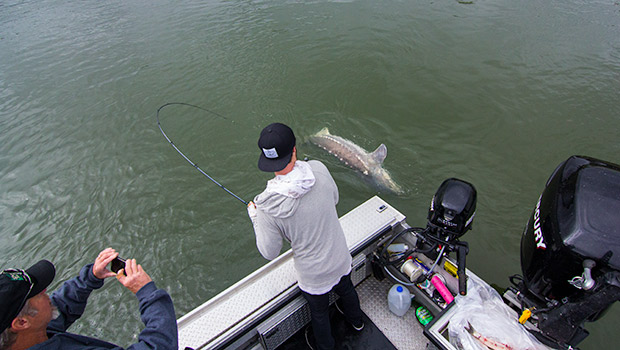 Apparently, now we’re talking about perhaps a Columbia River keeper sturgeon season. It’s been in the rumor mill now for a while. Good lord, here we go. It’s been shut down for a while to retention. It’s been like five years. We’ve got some keepers around so let’s go kill us some keepers.

So we get two weeks of keepers, which is cool, but there is no long-term consideration about this season. I don’t mind killing things. I kill a lot of things. But this is not the time and place to rob the bank account of future spawners.

The Columbia River has a major problem with the lack of sturgeon spawning. There’s next to no recruitment. No babies. No juveniles. No future and for very good reason. We’ve got sea lions eating the spawners. Sea lions have been eating many of our capable spawners for years now and there’s no end in sight.

Some would say that the numbers of sturgeon getting eaten are going down. The only reason the numbers are going down is because there aren’t many spawners left at Bonneville, which is the only place sea lions are being observed. There are not as many spawners in the spawning areas, which kind of coincides with there not being as many babies swimming around.

I know this is shocking. Hold on for a minute. Fewer fish are spawning, and there are not as many babies, so let’s just go kill the future spawners. That’s the idea we’ve got going here. Rocket science, right?

“Those in charge” are already screwing up by not going to war on the sea lion issue. This sophisticated game of political correctness being played is nauseating. The governor, many of our representatives (omit Schrader and Herrera Beutler), and the ODFW is complicit in this wildlife management disaster that’s certainly affected much more than just sturgeon. But, sturgeon is the topic at hand, and it’s our job as fishermen to make sure that when they finally do get around to fixing this situation, we’ve got a fishery that doesn’t take 20-30 years to fix.

I know of a handful of folks in favor of this. They are certainly entitled to their opinions. I’m just not going along with the idea. Nobody I’ve talked to thinks this is a good idea. Not a one. That being said, I’ve talked to lots of people who don’t think it’s a good idea, and who’ve said, “Yeah, if they open it, I’ll be there.” And so will I. If it’s open, I’m going to be guiding in Astoria. Everybody will be there. What were catch and release trips, clients will now have the opportunity to retain some keepers.

This is a reach. And I get it. People want to go out and make some quick cash. But there’s nothing sustainable about this. Nobody is building a guide or tackle business off a keeper sturgeon fishery right now.

What’s driving what? Who’s driving this? Who’s coming up with these ideas? Because this isn’t a good one. It’s like, “Yeah, well but the industry … ” Oh? The industry? Really? Yeah, the industry.

This is an industry. I couldn’t figure out why NSIA was supporting – I can’t remember what it was. I think we were pulling fish out of the tributaries. Yeah, that was it. And I was reminded that this is an industry association. It’s not a sport fishermen association. And I went, “Oh, note to self.” I don’t know how you separate the two. But apparently, that’s how that operation has been run for a long time.

That’s not what the industry thinks. They think something completely different. They think it’s a good idea to go out and kill a bunch of sturgeon right now when we’ve got no recruitment behind the ones we’ve got. It’s about now, it’s about “jobs,” and it’s about as short-sighted as it gets.

Our focus as a sport fishing public needs to be on a long-term solution. The solution starts with changing the Marine Mammals Protection Act and finding relief from the legislative handcuffs keeping us from controlling sea lion predation. There are efforts in the House of Representatives to do just that with the Endangered Salmon and Fisheries Predation Prevention Act. I wrote about it here. In my opinion, it would go a long way toward getting this piece of legislation passed if the effort to create this season would be directed instead toward lobbying Oregon and Washington governors and representatives from all over the country and finding broad-based support for this serious issue.

Passing this law is the only way we’re going to recover our sturgeon populations and bring them back to a point where we can harvest what should be an amazing renewable resource. Opening a sturgeon season right now is the last thing this resource needs. I sincerely hope fisheries managers can look past a short-term, meaningless season, to a long-term approach that puts the present quality of our catch-and-release opportunities and the sustainable harvest of a healthy abundant species  in the future, first.