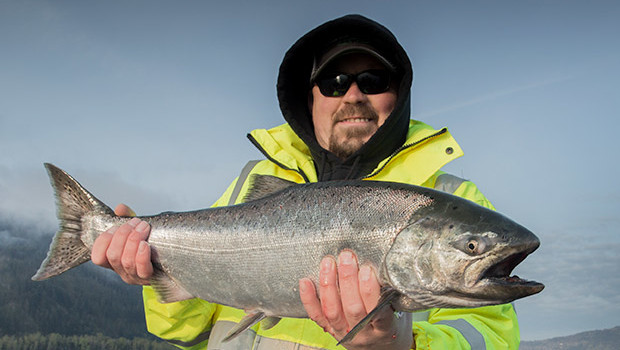 The commissions of Oregon and Washington got together today to decide on harvest for the upcoming Spring Chinook run on the Columbia River. A very decent run is projected as I blogged about back in December with 188,000 omega 3 packed, slime rockets destined for various tributaries on the Columbia River. Having fished professionally for many years, I know that fisheries managers do throw us the occasional curve ball, so it was nice to see that we will see a decent season that should offer us with about two and a half  weeks of good fishing. The Columbia is open to the retention of 1 adipose fin clipped Chinook between March 1 and April 9, excluding a closure day on March 29. That certainly sounds like lots of opportunity, but in reality there are only 2 1/2 weeks of worthwhile fishing in that time span.

15 years ago, prior to these tight seasons, fishing at Bonneville Dam was just getting going around the 5th of April. Peak fish passage at the dam usually doesn’t occur until the last few days of April, so what we’re being given is the very front end of the run, not the peak. Of course Columbia River flows and water temperatures will be the ultimate decider of how everything officially plays out, but run timing, overall, is fairly predictable.

Of course the Columbia River is not the only game in town and while Columbia River Salmon are nice to fish for, I personally feel there is much better bang for the buck on the Willamette River in Oregon and the Cowlitz River in SW Washington. Both of these rivers offer two fish limits, so when the fishing is good, you can actually put away some fish.

Let me know if you have any questions about booking your 2016 Spring Salmon trip. I will start running trips the 23rd of March and fish the Columbia until May 9th at which point I’ll move to the Willamette. Come May, I’ll be fishing for Spring Chinook on the Cowlitz River through the middle of June.