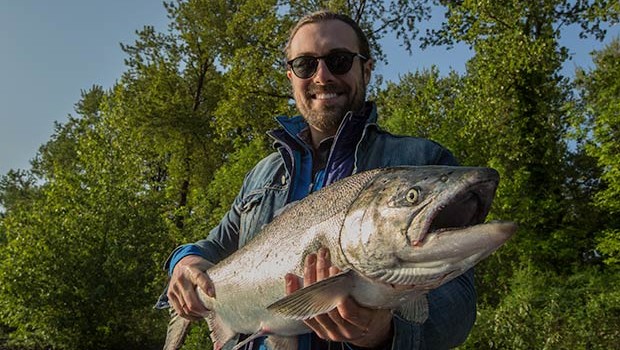 According to my sources, ODFW officials are expecting approximately 70,000 Spring Chinook to return to the Willamette River. This is a very decent projection and if conditions line up, anglers can look forward to some good Spring Chinook fishing in Portland starting in March. Granted the hard core folks will begin in January, but realistically March is the month with the run building steam into April. May is always a toss up as it has brought me the best of Spring Chinook fishing and the worst. The 2015 run provided very decent fishing through April and then warm water temperatures got the best of us and fishing started to get very particular. Granted, the 2015 snow pack was abysmal and really put a damper on what could have been some pretty spectacular May fishing. The Willamette River saw 87,000 returning Spring Salmon, but you’d have never known it by the fishing results that most saw in May. Conditions are a huge deal for Spring Chinook fishing and nowhere more critical than on the Willamette.

I think we’re all hopeful for the good early start to this year’s winter snow pack. We’re way ahead of the game at this point, but a good southerly storm could take it all out in a hurry. I’m not much of a skier or snowboarder these days, but I’ll be praying those guys have a great season as what’s good for the mountain crowd is good for Spring Chinook fishing. Cool water temperatures often times equate with good flows and both are key elements to keeping Chinook biting as the spring moves on. During years with exceptional conditions I’ve caught limits into the end of June and as far as I’m concerned, we’re due for some awesome conditions.

This report comes on the heals of last week’s announcement that 178,000 Spring Chinook  could be returning to the Columbia River.  Between the Willamette, Columbia and returns for the Cowlitz, Portland/Metro fishermen can look forward to some pretty good fishing in 2016. Depending on productivity in the Columbia River, I’ll start snooping around the Willamette in mid-March and look forward to the possibilities that the 2016 run could provide. If you’d like to get out, feel free to email me.