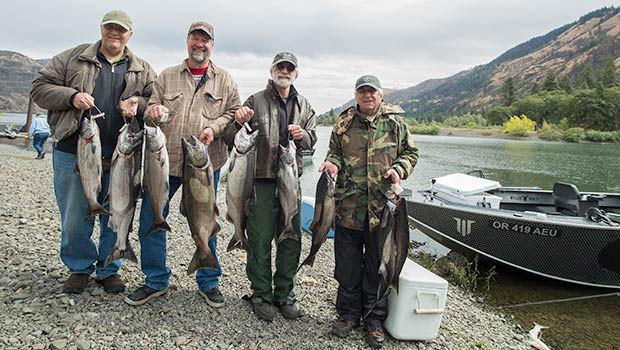 Anyone who fished Buoy 10 this year, saw the massive numbers of Chinook.  As we’ve moved up the river to fish Bonneville, the Deschutes and Klickitat Rivers, we’ve seen the same big numbers of Chinook and for the time being, there’s no end in site.

The big question as we entered the season was, how were water temperatures going to hold up? I’m not sure how, but amazingly the water above Bonneville Dam is cooler than it was last year. My guess is it has something to do with water releases out of the dams which appear to be happening on a large scale. The pools above the dams are very full which contributes to the cooler water temperature and also allows folks to get around without damaging their boats or trailers.

All in all, I couldn’t be more pleased as I had serious doubts about the potential of this year’s run even a month ago. Hopefully things will just keep right on going up until the point Tillamook Salmon take center stage.

Let me know if you’re looking to get a line wet. Available or not, I’ll do everything I can to get you out fishing.