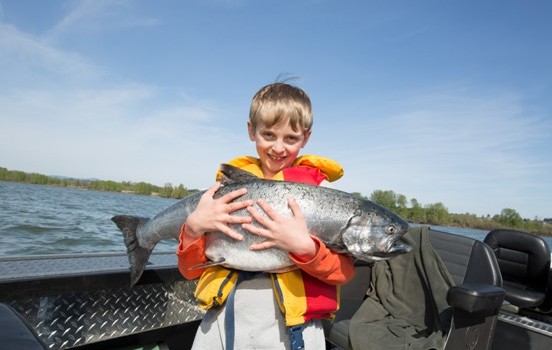 It’s never too early to talk about spring Chinook, and that’s what this segment covers. We are looking at early prospects for springers in the Columbia River.

Every year when the springer run starts, folks go crazy. This year they may actually have a reason for doing so. With the prevailing low water the run may show a little sooner than usual. It’s not exactly good yet, but a few fish are being caught. Right now anglers are putting in about 40 hours per fish. If you get on a roll, you can reduce that to about 10 or 12 hours per fish.

However, you’ve got a lot of competition in the Columbia. There are a lot of baits being pulled by a lot of fishermen, so there is a lot of flashy, fishy-looking stuff out there.

The Columbia is also jammed full of smelt right now. From the mouth of the Columbia to the Sandy River, there are schools of millions of small fish, and all those fish make for a big distraction. You can fish above the Sandy and get out of the smelt, but since the bulk of the early returns are headed to the Willamette and other lower river tributaries, it’s hard to find fish up there this early.

Also, recent reports suggest there may be as many as 7,500 marine mammals in the lower Columbia. They are already out there eating, and they are going to eat a lot more in the coming months. They might even pluck your springer right off your line, if you’re one of the unlucky ones.

Between the smelt, the extra fishermen, and the marine mammals, it’s still hard to say your time on the Columbia is worth it. However, things will improve soon. The smelt will be gone, and more salmon will enter the system.

I still have a few spots left for  spring Chinook on the Columbia River. Come join me in my 25 foot Raptor that is built for fish catching and comfort. We’ll wet a line with G- Loomis rods and Shimano reels. It’s a good time to be fishing, and it will only get better.

Check out the segment from this weeks show below.