Columbia River at Astoria- fishing ahead of schedule 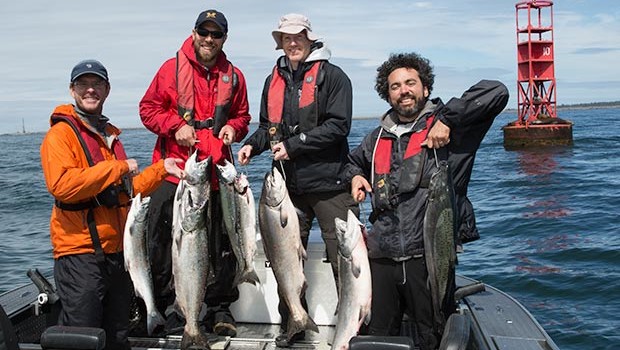 “Ahead of schedule” might be an under statement with good fishing having started in July. The river has been loaded with Chinooks with a while and it’s quite amazing how many Coho/Silver Salmon have  made their way into the river.

The official start of my Astoria Buoy 10 Salmon fishing season was Saturday, but apparently the weather didn’t get the notice as we fought a SW front all day. It rained, blew and fishing wasn’t good at all. As the front blew through Sunday improved and by Monday the 10th fishing was rolling again.

We’ll experience some pretty sweet tides this week with fresh ocean water moving in through the mornings. This incoming tide will give us a really nice window of opportunity to catch fish and punch tags.

Speaking of ocean, we were able to get out to do a little looking around on a beautiful day and found both Chinook and Coho between 18-24 feet on the line counters. We caught a few fish on herring, but the anchovies really went off in the short time that we were out. We only needed a couple Coho for our limit and with it being such a nice day we decided to take a little cruise. It appeared that most of the fleet was between Buoys 2 and 3, but when I say most of the fleet, I only saw about twenty boats and only had one in our area. The run into Hammond was just as nice as the run out and on the way in we shot the photo above. Every year I try to get at least one photo in front of the actual Buoy 10. It may come as a surprise, but we don’t see the Buoy itself all that often as the term Buoy 10 really covers about 30 miles of lower river and ocean. The Buoy sits just outside of Ilwaco and we’re often fishing closer to Hammond and above the Astoria Megler Bridge. For relationship sake, the Astoria Megler Bridge is about 7 miles from Buoy 10.

Outside of the weather hiccup last weekend, the fishery is ahead of schedule and I’m really looking forward to the upcoming fishing. With the number of early Coho/Silver Salmon and the good returns of Chinook, we should see an epic season.

If you’re interested in getting out, call or text 503.680.6809, or you can send an email to info@lancefisherfishing.com.