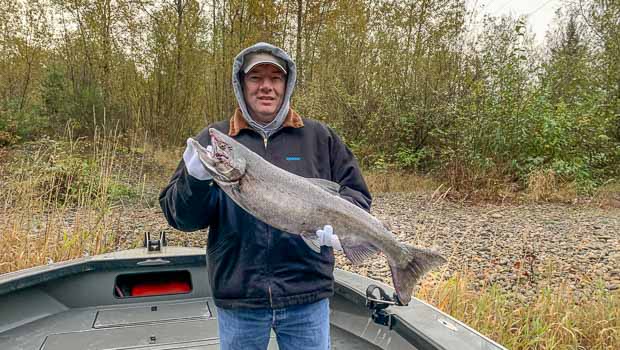 Fall certainly arrived in the Portland area this past weekend. While temps may be a bit chilly in the mornings, the sun has been shining and we’ve had some great times on the water. Late Fall Portland area fishing is going strong, with our sturgeon season just beginning and another month of salmon fishing to look forward to.

By this time of year the majority of the fall salmon have moved from the Columbia River into its tributaries. That just means we get to chase them for longer as we follow them into the smaller rivers like the Lewis River. Located just north of Portland, the Lewis River still has plenty of fish moving through it. First thing in the morning you’ll probably see them jumping and later you may see them jumping as you wrangle them to the boat! The river flow is holding steady at close to 4,000 cfs, which is right about where we were last year at this time. We expect to be fishing for salmon through Thanksgiving, with both native and hatchery chinook as well as hatchery coho retention allowed.

While some may think sturgeon fishing is a summer sport, in the Portland area we are able fish for sturgeon for most of the year. We’re currently offering catch and release sturgeon trips on the Willamette River. Just the other day we caught over a dozen oversized sturgeon. That’s a lot of fish to take on in a man vs fish battle. Some of them were longer than any of the guys in the boat! And don’t think it’s only the monster fish that put up a fight. Reeling in doubles of smaller fish can provide just as much action. We’ll be pitting ourselves against these prehistoric looking fish from now through the spring. Anglers of all ages and abilities enjoy sturgeon fishing in Portland. Just bundle up and enjoy the experience of targeting big fish all day long.

As always, let us know if you have any questions or are ready to book a trip. There’s still lots of fishing to be done this fall, followed by winter steelhead, and 2021 will be here before we know it.