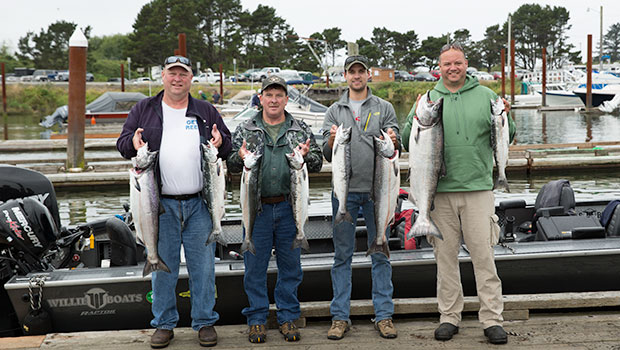 While this isn’t official until May, experience tells us that this is very likely going to happen. The 2022 Ocean Salmon Season for Astoria has been proposed and it looks like retention will be wide open for both Chinook and hatchery Coho on opening day. The ocean salmon season is slated to start on June 25th from Leadbetter Point to Cape Falcon. These are the same fish that we target in August and September in the Columbia River. Proposed limits are: 2 salmon per day, one of which may be a Chinook. Any Coho kept must have a healed adipose fin clip.

Astoria really has two salmon seasons. First to open up is ocean fishing where we target Chinook and Coho Salmon just outside of the mouth of the Columbia River and north to south within about 10 miles. The early season gives us a crack at the June Hogs that are entering the Columbia River, as well as some Coho. As the summer goes on, the Coho get bigger and Chinook Salmon continue to arrive at the doorstep of the Columbia. By the time Buoy 10 opens up, things are going nutso and at that point we’re able to target those same salmon in the estuary itself as they begin their run up the Columbia.

Questions? Ready to reserve your seat? Let us know how we can help!