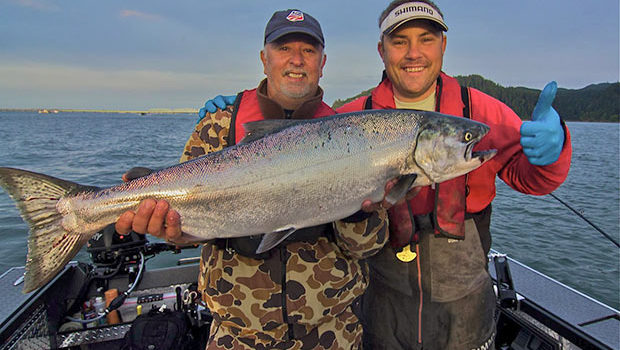 Fishery managers are looking at returns of between 582,600 Fall Chinook for the Columbia River in 2017. Official numbers will be announced later today.

What does it all mean?

The Buoy 10 season will be modified in order to extend fishing through Labor Day. Expect mark select fishing for part, if not the entire, season in Astoria. Mark select rates are typically around 30%, which means a little catch and release will be happening in 2017. Tongue Point to the Lewis River will also have similar restrictions in order to protect lower river stocks. Above Warrior Rock and in the Portland area, expect restrictions to lighten up a bit as the URB/SRW component of the run is in decent shape.

The bottom line is, Native Tule production is the limiting factor for the whole fishery. I have harped on this for years now asking, “What is the plan for lower Columbia River Tules?” The answer is always, “Well, we live on top of them. There’s no habitat”. While this is partly true, the rest of the story is a pink elephant in the room that fisheries managers either refuse to acknowledge, or have no political will to mention it.

The rest of the story is about all the habitat (available store shelves) available in the Lower Columbia River that resides behind areas that have traditionally been “Safe Areas.” While Safe Areas seem like a good idea, they include much of the remaining habitat available for Wild Tules. Rivers such as the Youngs, Lewis and Clark, Clatskanie, Deep River, Big Creek, Gnat Creek and others are places where we could return Wild Tules back to, but doing so would require massive changes to how things are done on the Columbia River.

Know that I’m not a big fan of the problem, or any of the solutions. Regardless, I can only envision a future where limited Wild Tule production keeps us, as sport fishermen, from actually being able to fish for healthy stocks and could shut us down to fishing entirely. Our fishing is already limited, and the problem is going to continue to grow.

Word on the street is that National Marine Fisheries is coming to the end of the inaction by Oregon and Washington. The consequences of getting the Feds involved could be very painful for all, but allow our local fishery managers to punt the problem and avoid responsibility for the necessary changes.

We need to look at the situation, understand available spawning inventory, and do what we need to do to raise Tule populations to sustainable levels. It’s my belief that if action is taken immediately, we could potentially avoid long term closures that would hurt everyone. A proactive approach might allow us to preemptively make changes that sustain all of us in the near term and allow us to prosper in the future.

The answer is really not that complicated. The playbook has already been written. The Nez Perce faced a much larger challenge in the 90’s and today supports everyone of us with harvestable fish. From the brink of extinction, the Clearwater and Snake Rivers are now the torchbearers of the Columbia River, but only because the tribes found relief from the idiots who ran their fisheries into the ground. With the settlement reached in U.S. vs. Oregon, the tribes embarked on an aggressive new path that utilized cutting-edge hatchery technology to create a sustainable, abundant, naturally producing run of Salmon. From less than a couple hundred fish coming over Lower Granite Dam, the affected rivers now produce tens of thousands of natural-origin fish.

I’ve talked extensively with the tribes and interviewed many of the folks at CRITFC. One of the questions I always wondered was, “Have the states of Oregon and Washington ever called to learn from any of your success?” The answer in 2015 was “No”.

The problem is clear, but leadership and fresh thinking by everyone involved is required to move forward. If we do not change, we will operate from a place of deprivation instead of celebrating the results of abundance.