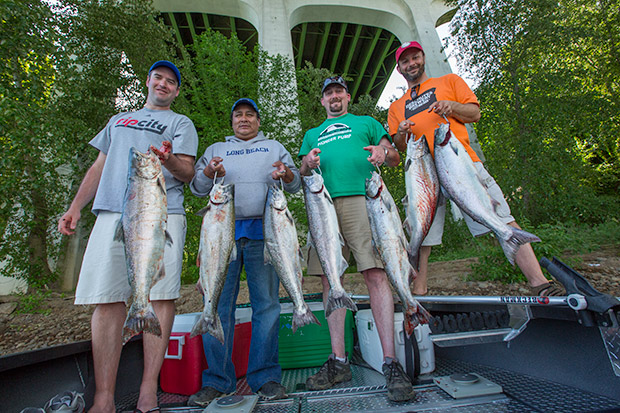 The Willamette River hosts three separate runs of Salmon although only Spring Chinook Salmon are seriously targeted. There’s a small fall run of Chinook Salmon that enters the river, but these fish are mostly untargeted as warm water temperatures which inhibit the bite and the low quality of the table fare stear fishermen to other opportunities. The Willamette at one time likely hosted a large fall run, but with the construction of impassible dams and the subsequent warming of the river, large runs of Fall Chinook were guaranteed to never exist.

The Willamette also receives a strong run of Coho or Silver Salmon that is a remnant of a hatchery program that ended in the early 1990’s. Often times huge numbers of Coho/Silver Salmon head over Willamette Falls and branch out to various tributaries. State and federal fishery managers want to tell us that hatchery fish can’t sustain and here’s an example that has managers totally perplexed. As many as 20,000 coho have gone over Willamette Falls in the last 20 years and anglers above the falls have began to learn where to target these fish. Again, because of a plethora of other fall fishing opportunities most fishermen, myself included look to fish elsewhere during the time that most Coho return.

The lack of attention that the fall returns get is made up entirely by the insanity that results from the arrival of the Willamette River Spring Chinook Salmon run. It’s an excitement that has existed up and down the Willamette Valley for thousands of years as some of the best quality Salmon in the world return home during the late winter and spring months. The mainstem Willamette receives some returns, but many of the fish that enter the system end up in one of the many tributaries that feed the Willamette.

For more on the fishing I offer for Springers, visit my Willamette River Spring Chinook Salmon Fishing page. 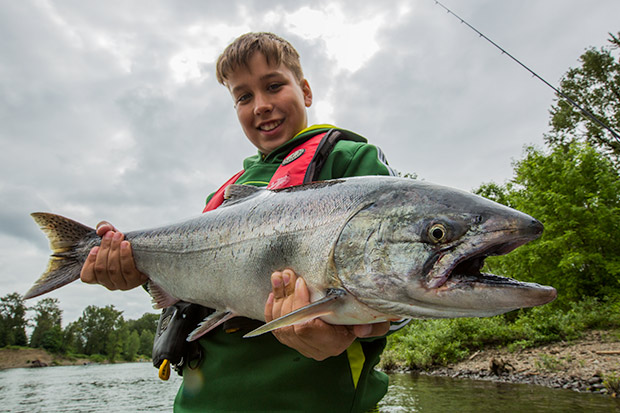 The Willamette Spring Chinook Salmon run is composed of about 85% hatchery fish and 15% wild stocks. At this point, all wild fish must be released, but their relatively low percentage of the catch certainly doesn’t dilute any enthusiasm. 60-100,000 fish return annually to the Willamette and as a result, allows anglers to generally keep 2 hatchery fin clipped fish per day.

In addition to the impassible dams that restrict access to 90% of Spring Chinook spawning grounds, new pressures have developed in the last 15 years that have required more urgent attention that fisheries managers have to this point offered.

When I was growing up we had a single male Sea Lion up at the falls. He was slightly blonde in color and I think he was an old guy as he didn’t move very quickly. He’d catch a few fish and go find someplace to sleep it off. He’d disappear in late May and then return in early spring.

This was all fine and good until the mid 2000’s when more and more sea lions began to join our friend. Rapidly pinniped predation has become a big issue, but not just for the Salmon, they are also a huge problem for our oversize or brood sturgeon and lamprey eel as well. For the sake of the information on this page, I’ll stick with the Salmon, but I’m sure you can imagine the difficulty lamprey and sturgeon also live with with when so many sea lions exist in such a necessary area for these species. 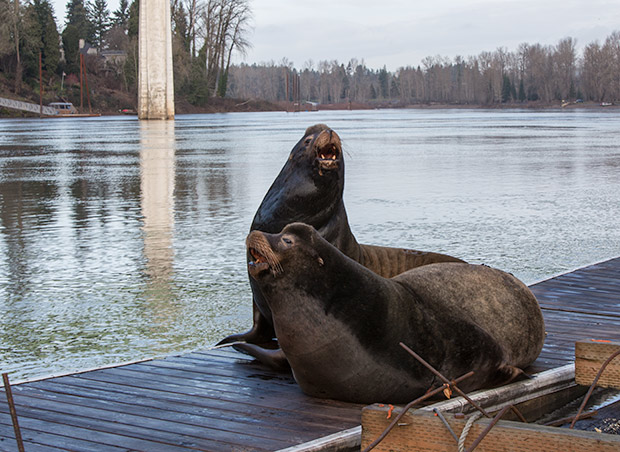 The Willamette Falls is a really cool site that many of my clients enjoy seeing. The falls span the entire width of the river creating a funnel that Salmon must enter. At one time, Salmon just naturally passed the falls, but at the turn of the last century, the falls were further built up to divert water through the mill that lives on the falls’ shoreline. Two fish ladders were added to rectify the build up which is what we’re left with today. The sea lions being smart and opportunistic will simply place themselves right at the base of the falls and in the fish ladders as well. A couple dozen sea lions will come in and out of the area per day inhibiting migration all the while.

To this point, next to nothing has been done to remedy the situation. Sea lions are protected under the Marine Mammal Protection Act and although the state has the ability to push back and get special consideration from the feds for the situation, the willingness by the last two Governors (Kulongoski and Kitzhaber) has not existed.

Spill on the Columbia River, which has been one of the greatest benefits ever offered to Columbia River migratory fish, is creating opposite results for the Salmon of the Willamette River. Spill is the act of actually spilling water over the top of the dam in an effort to flush migratory juveniles down the river and to the ocean. Without this assistance, many juveniles became food for the many predatory fish (small mouth bass, walleye, pike minnow) that exist behind the dams and bird predation that exists throughout the region.

The Spill that happens on the Columbia during the spring and early summer months ends up backing up the Willamette River below Willamette Falls and causes juveniles that are headed down river on the Willy to get caught up in one of the most dangerous places on earth if you’re a Salmon. The Willamette below the falls is choked with predatory fish and although water quality has improved in recent years, water quality issues still exist in areas like the Portland harbor where young Salmon are likely to get stuck. This is a relatively new discovery, but one that will require more immediate attention to remedy.

Despite all it’s warts, the resilience of the Willamette River Salmon runs is amazing. Spring Chinook runs are stable and with just a little tweeking, Spring Salmon runs on the Willamette could return double the amount of fish. The technology and know how exists to fix many of the problems on the Willamette, it’s just a matter of how important our current Governor and future administrations decide to make it. The Willamette River is unique and a truly incredible resource that if properly managed could continue produce even greater abundance of Salmon for the valley and the Northwest.
For more on the Salmon and Sturgeon fishing available to my customers visit my Willamette River Fishing page.