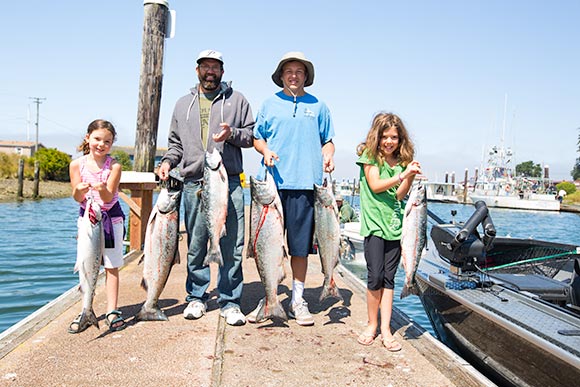 With all the hubub about the Columbia River, many are wondering when Ocean Salmon numbers around Winchester Bay will be released. Anyone that fished with me for Salmon at Winchester Bay last year, got on some of the nicest Salmon of the year and lots of them! Winchester Bay and the ocean were a new stop on my fishing calendar in 2014 and I believe that this will be a great place to be in the future for early arriving Chinook and Coho Salmon. Winchester Bay offers us one of the first opportunities at the Fall Salmon run and really fills a void that I had for my late July, early August customers. Some of you may ask why I don’t just fish the ocean outside of the mouth of the Columbia and the simple answer is, because of consistency. The Winchester Bay Ocean is much easier to access with a very short bar crossing, fishing also appears to be significantly more consistent for big Chinook as well.

I’m not sure why it takes the departments so long to get the Ocean calculations together. Regardless, meetings to set ocean seasons will begin February 16, 2015. The meeting will be held in Newport and will be the first look at pre-season projections. This meeting is really a prelude for the Pacific Fisheries Management Council (PFMC) meeting where ocean seasons up and down the west coast of the continent get set.

The PFMC meeting will take into account sport and commercial allocation and try to come up with numbers for each as they try to bump right up next to allowable impacts. This approach to harvest certainly has it’s problems as runs are hit hard before managers really know what they have.

The 2014 ocean season was a prime example of the shortcomings of this system as many of the predictions were off by as much as 30%. Commercial and sport fishing seasons that were contained to respective system bubbles would allow managers to keep track of returns more efficiently and take pressure off of fish returns that are below acceptable levels. Notice that I’m not implying that we should not commercial fish, I’m simply suggesting that moving to a bubble approach could allow the best of both worlds.

I’ll be keeping tabs on the ocean seasons, but by all indications, we’ll be looking at wide open opportunities from July 20 through the middle of August when I take off to Astoria.

Let me know if you’d like to come down. It’s great place to spend a weekend with the fishing, inexpensive lodging and the Oregon Dunes all right there.