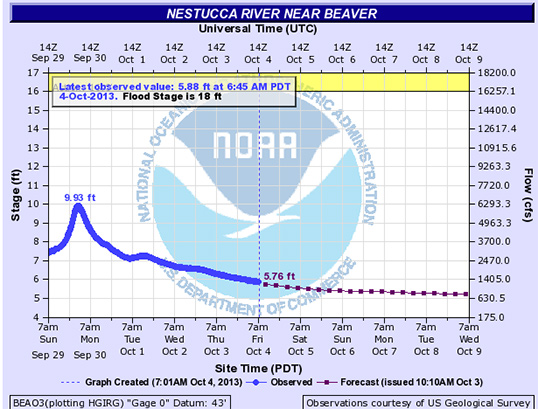 Wilson, Trask and Nestucca Rivers get primed for Salmon fishing

Wow, what a rain. Although I missed most of it being on the east side fishing Columbia River Salmon at the Deschutes and Klickitat Rivers, the aftermath of this early fall storm was obvious.

Tillamook County Rivers all went over their banks creating a waiting game for rivers like the Nestucca, Wilson and Trask to come back in shape. Yes it’s early, but as I write this blog post, there are limits of fish to be caught in the rivers. Big, burly Chinook that make these Tillamook area rivers famous will be grabing plugs and gobs of eggs for the next several days. I don’t expect river levels to stay up the way they are and in short order the bays will again become the center of attention.

Many have texted and emailed me over the last few days to see what all this rain means. What’s going to happen to our fishing opportunities going forward?

The simple answer is nothing. Yes, it’s a rain event, but what we’ve lost are fish that would have been dark in very short order and on their heals are thousands more fish that are making their way down the Canadian and Washington coastlines at this moment. Fall Chinook on the Wilson, Trask and Nestucca Rivers begin showing up now, rain or not and will return, nickle bright, all the way through November to the 1st week of December. The only thing this event will change is where you fish for a few days.

I really don’t care where we catch them, river, bay, tidewater, it’s all the same when the fishing is good. Speaking of which….

I talked to a friend of mine who started fishing Tillamook Bay a couple weeks ago and already he has 3 fish over #40! This is great news as we’ve been short on 5 and 6 year old stocks the last couple years. In addition to the quality, he indicated that the numbers are the best he’s seen in 40 years!

So I’ve got a few more days on the Klickitat and then I’ll be moving my operation to Tillamook on Tuesday to set up shop for the rest of the fall. If you’d like to get out, let me know as I have a few openings.