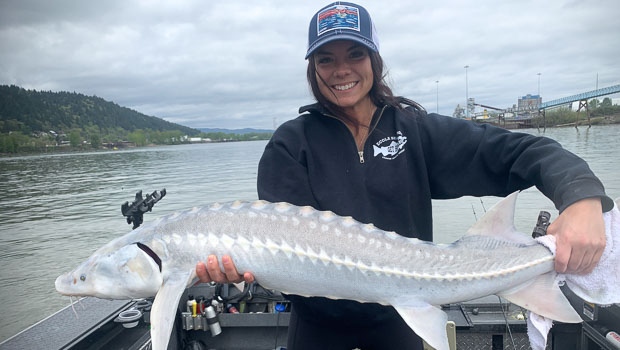 Wow! Something that hasn’t happened in the Portland area since October of 2013! We have been given a keeper sturgeon season on the Willamette River. ODFW is allowing sturgeon retention on 2 Saturdays, June 20th and June 27th, 2020. Fishery managers have decided to do a test run for a summer retention season.

With everything that’s been going on lately, I wasn’t expecting this. It will be interesting to see a Portland keeper sturgeon season goes. Open areas are the lower Willamette River downstream of the Lake Oswego/Oak Grove Railroad Bridge and Multnomah Channel. Battling these prehistoric fish provides an epic day all on its own, but taking that catch home for dinner brings a whole new element of satisfaction. This year’s keeper sturgeon legal catch size is 44-50”, measured from the nose of the fish to the fork of the tail, which will provide many delicious meals. Smoke it. Grill it. Fry it. Kabob it. Do whatever you like. The firm, white, boneless flesh from a sturgeon can be used in almost every way imaginable.

Let us know if you have any questions or would like to get a trip on the calendar. We do have some availability.