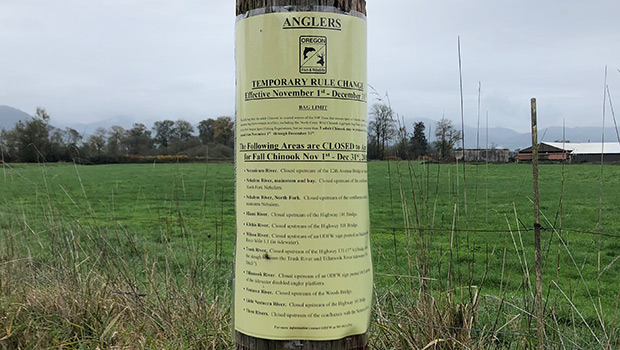 Anyone who has done a lot of fishing here in the PNW knows that 2018 was not the best fishing. Of course there were some good days of fishing, but catch rates overall were not up to par. I know there’s more to fishing than the catching, but let’s not kid ourselves. I’m not into boat rides. Yes, even during a good year, a slow day of fishing can happen, but by in large it should not be the norm.

As many of you know by now, our coastal rivers were closed to protect the limited number of returning salmon. I was in agreement with the closure, and in fact was trying to rally support among other guides for such a closure a week and a half prior to the announcement. I wasn’t the only one. Know that everyone that I talked to agreed, but we were all reluctant to be the first to say something. Fortunately the back channels were open and the right thing got done. Just know, this was an angler driven closure. In my opinion it didn’t go far enough and I believe that the bays should be closed as well, but the ODFW often operates on consensus and there in lies much of the problem. Consensus and stake holders will be the end of our fisheries.

So How Did We Get Here?

Starting in 2013 a warm blob made its way into NW waters. From Oregon to Alaska, the mass has moved and we’ve heard about it at different times. Whether we heard about it has largely been dependent on whether the mass was at the right of Oregon or Washington. Either way, the mass has likely wreaked havoc on ocean salmon populations between 2013 and 2016 at least. There is debate as to when the conditions resolved, but recently it has been noticed again by a scientist at University of Washington.

If we assume that “the blob” would have an effect, then all of this year’s age classes would have been impacted. The ODFW and NOAA has certainly known of these ocean conditions, and this years run was projected to come in under the 10 year average, but yet they still missed.

So Let’s Play this Out?

Projections are made for the given run year. We’re not talking about feeders. This is another discussion all together. The fishing all starts in Alaska for most of our returning fish and as they migrate down the coast. Everyone gets their crack at the returning run. The Columbia River is really the first regional fishery to see returns, and anyone who fished the Buoy 10 fishery could see the writing on the wall. The Columbia River below 395 in Pasco, Washington ended up closing to Fall Chinook fishing on September 13. All fishing had happened in the ocean and down the coast, but the first opportunity to really assess run size was at Bonneville Dam. Oops.

Of course the wheels are in motion already, and fisheries continue on stocks of fish that are returning to the Siletz, Tillamook, etc. The fisheries progress for almost two months before the white flag is raised and fisheries are curtailed with no opportunity for the folks that don’t have boats and wait all year for the fish to get to a place where they can actually catch them. The tribes have been saying this for years, but of course if it doesn’t affect you, who cares right?

There are many in Tillamook that would say this was the worst fishing they’ve ever seen. My guess is that you could go to other parts of the Oregon Coast and find other systems, with fishermen that would say the same thing. In the end, we have a run year where there is a good chance that escapement will not be met on many of our rivers. No one knows what this small number of recruits will encounter when and if they ever get to the open ocean.

I’m not going to get into bird predation, pinniped issues and the asinine hatchery policies that are now reality. I’m just going to get into another way of doing things given the current climate. It’s the way any sensible person or business would manage their own affairs, but know, ODFW and NOAA have never been accused of being sensible.

Commercial fisheries give next to nothing to water sheds, restoration, step programs, etc. That’s a fact. Personally I have nothing against commercial fishing. This is just the truth. When is the last time Ocean Beauty Seafoods or whoever for that matter showed up or contributed to our local efforts? They don’t, but yet they are the first to eat. They basically help call all the shots at North of Falcon. They make the rules while our region sacrifices in so many ways (another blog post).

Had this years run been managed for escapement, the intercept seasons would be a fraction of what they were. Alaskan and Canadian commercial fisheries would receive very conservative opportunities and then fish for the stocks returning to Alaska rivers (insert the Canadian scenario if you’d like). As our Salmon arrived to regional waters, ODFW and NOAA would continue their assessment of run size. Through catch rates and places like Bonneville Dam, managers would eventually be able to understand more accurately how many fish should be taken to assure escapement. I mean, God forbid that we actually end up with more fish on spawning beds than projected. I know, I’ll say it before you think it. There are ways around keeping the big, bad hatchery fish off spawning beds, don’t fall into commercial speak. There are plenty of options around this, not the least of which would be to go to brood stock programs throughout the basin.

The system wants, for a variety of reasons, to keep the status quo. There is big money in the whole mess. It will take significant leadership in order to change our current trajectory and bring opportunities to the region that many of us can imagine. I have lots more to say, but this is enough for now.

Peace and love to all,