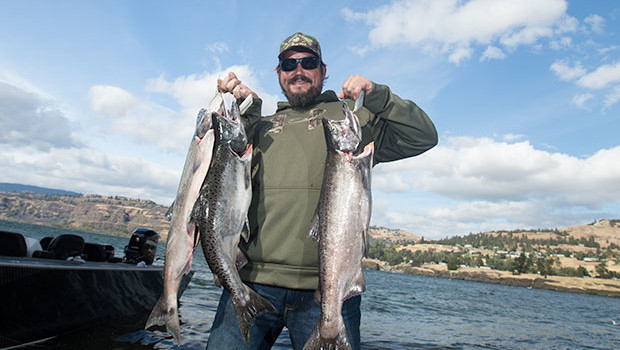 The last two years at the mouth of the Klickitat River have been quite amazing. Characterized by doubles, triples, beautiful weather and lots of happy customers, the Klickitat has quickly turned into one of my most popular fisheries.

The Klickitat can be broken down into two sections. The river flows out of Mt. Adams and is home to nice returns of fall Salmon. The Chinook and Coho Salmon are known to be good biters and will bite all your favorite Salmon fare. Eggs are my favorite for Chinook and Coho, but many fishermen do quite well with plugs. I keep threatening to fish a plug and put them in my boats every year, but they never make it into the starting line up.

The only real barrier to catching fish in the river is the silty run-off from Mt. Adams and the occasional fall rain that can sometimes surprisingly affect the river. The Klickitat can go out for a week at a time without notice. It’s one of the more volatile rivers I know of and often spoils plans for fishermen with no plan B.

Speaking of plan B, the mouth of the river allows fishermen to avoid this issue all together. Of course the Klickitat does get muddy, but there’s plenty of beautiful green water in the Columbia. The volume of water that flows down the Columbia dwarfs any amount of silt that the Klickitat can spit out and because of this, I’ve never seen a day that the mouth wont fish.

At the mouth of the Klickitat there is lots of different tactics being used. Trolling Super Baits, jigging and hovering eggs are most popular. I just about always fish eggs. My customers like the hands on approach and enjoy the details that make hover fishing affective. Granted the egg cure is a big deal and I’m very glad that the fish like mine.