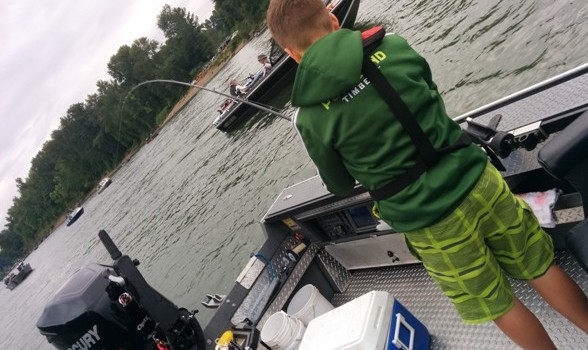 Owin Hays of the Outdoor GPS Show is my guest on this segment, and we discuss springer fishing during the early season on the Willamette River. Owin has had some early success for springers, and he talks about what it takes to catch those finicky spring Chinook in low water conditions.

With extra clear water in the rivers, and near perfect water temps, the potential for a good blast of springers in late March or early April is serious. However, those conditions could change quickly with this weekend’s rain. It has a better chance of affecting the bite in the Willamette, which is prone to blowing out in rains like those predicted.

In the Columbia the affect should be a bit more muted, and it is possible that the good conditions and water temps will still drive a good early bite there. Since the water has been clear in the big river, Owin and I discuss the option of leaving the Fish Flash at home.  The Fish Flash has become a thing of habit for most anglers trolling herring in the Columbia, but when it is running this clear the flasher becomes less important.

Catching springers in the early season takes commitment, and that can set the devoted angler up for a tremendous season. Fishermen that put their time in early and late can end up with a surprising number of springers by the end of the run.

Dialing in early and staying dialed in means eating a lot of those prized spring Chinook fillets. There are no real bad ways to serve springer, but according to Owin, it’s hard to beat grilled springer served with pasta and salad for pleasing the family.

Upriver “black-face” salmon are on the way

Although these early Willamette “snow bellies” are great on the table, the upriver bound “black-face” springers that will arrive soon will be even better. The salmon headed above Bonneville Dam have even more of those omega-3 rich oils that make this fish so tasty. And, those upriver runs will start arriving very soon.

So get out early and get your groove early. It may be early, but it will pay dividends as fish continue to show up.