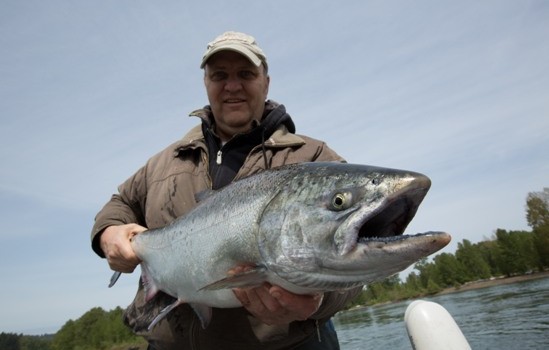 It’s never too early to talk about spring Chinook, and that’s what this segment covers. We are looking at early prospects for springers in the Columbia and Willamette Rivers.

Every year when the springer run starts, folks go crazy. This year they may actually have a reason for doing so. With the prevailing low water the run may show a little sooner than usual. It’s not exactly good yet, but a few fish are being caught. Right now anglers are putting in about 40 hours per fish. If you get on a roll, you can reduce that to about 10 or 12 hours per fish.

However, you’ve got a lot of competition in the Columbia. There are a lot of baits being pulled. You’ve also got a river full of smelt , and all that competition it makes it tough.

Recent reports suggest there may be as many as 7,500 marine mammals in the lower Columbia. They are already out there eating, and they are going to eat a lot more in the coming months. Between the smelt, the extra fishermen, and the marine mammals, it’s still hard to say your time on the Columbia is worth it.

The Willamette River is another story. There is not a ton of fish in the Willamette, but there are opportunities. A couple fish are being caught, maybe ten a day, but remember. These are springers, and not all of the biters get hooked. So, you can get in on it. Get a bunch of guys together in a boat and give it a try. You could hook one.

A few guys are already on it. They are not to be denied. And, you don’t have to compete with the smelt.

Tides will be very important this year. They are always important, but with the low water and the slow currents they will be more important than ever. There are some good tides coming, and there is a little rain in the forecast. Things will pick up soon.

Don’t hesitate too long, for this this fishery could go quickly. Temps could rise fast, and the bulk of the fish could move through. It could be over before you know it.

I still have a few spots left for steelhead and spring Chinook. Come join me in my 25 foot Raptor, or my drift boat, the 17-54 Willy, and we’ll fish with G- Loomis rods and Shimano reels. It’s a good time to be fishing, and it will get better, so book a trip soon.