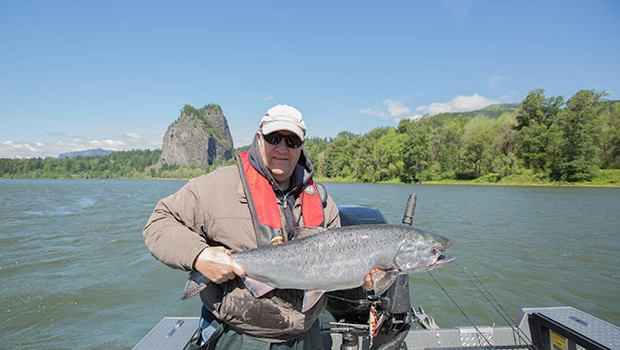 Effective Saturday, May 30, the area between Beacon Rock and Bonneville Dam will open to Salmon and steelhead fishing. Of course it’s late in the Columbia River Spring Salmon season, but it’s never too late to get an opportunity to fish this area. The area wasn’t slated to be open until June 16, but with available Spring Chinook impacts still to be had, fisheries managers decided to effectively open the area to allow fishermen to dust up on Spring Chinook, but also give folks a chance at any early arriving Summer Salmon.

We received similar early opportunities in 2014, but last year provided very different water conditions. I can remember currents screaming in 16-18 feet of water, not too far from shore. This year, with a lack of snow pack, you’re liable to be fishing very near the channel in these sort of water depths. Fishing was best the first five days after they reopened the area and I suspect fishermen will see a similar pattern this year.

I think fishermen are going to find a few opportunities on the hook fishing K15 Kwikfish and small spinners, but what really intrigues me with the lack of water is the potential for an egg bite in the deeper water up around the deadline. I don’t know if it’s going to happen, but if it’s not going to happen this year, it’s likely never to happen this late.

Fishermen haven’t ever experienced these conditions at this point in the season and with it being a unique year, there are likely to be some opportunities that develop that haven’t presented themselves in the past. There’s no doubt that there will be some fish in the area. How many and where guys are going to find them will be the question.

Know that there will be lots of shad fishermen in the area. If you’re going to anchor, know that shad fishermen generally won’t give you lots of room below your boat as they’re mindset is all about the three pounders they’re going to catch. This is an obvious problem if you’re Salmon fishing, but I’m not sure you’re going to be able to avoid it. Just know that’s how it goes this time of year and prepare yourself mentally for the experience.

Limits remain the same as during the Spring with only 1 fin-clipped Chinook being allowed. Starting June 16 the limit will allow 2 adipose fin-clipped Chinook and let’s just hope mark rates are considerably better than the rates that we endured last year.