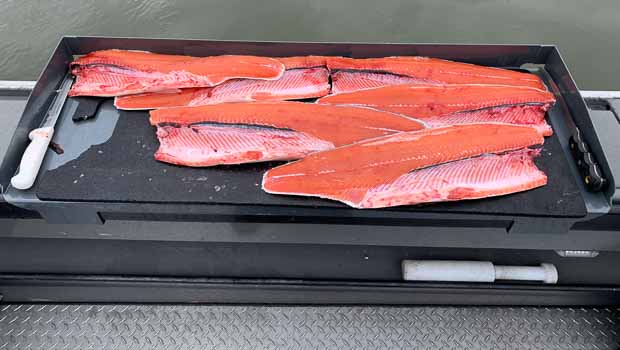 Hundreds of thousands of summer steelhead begin to make their way into the Columbia River in June.  They’re headed to rivers like the Cowlitz, Lewis, Willamette drainage, Deschutes, John Day, Snake and a plethora of smaller systems along the way.

The steelhead run on the Columbia is a combination of wild and hatchery stocks that run in size from 5-20 lbs.  They are very aggressive on the strike and often times run us a long way down the river.  I fish the lower 50 miles of the Columbia River (usually within an hour of Portland)  for steelhead and as a result, many of the fish we catch are still covered with ocean lice and are as bright as a mirror.

As a bonus, we’re often times fishing on large numbers of Chinook and Sockeye at the same time.  Yes, it’s a smorgasbord  in the fish box as on many of my trips. We’ll have representatives from all the species.  We’re steelhead fishing, but nobody is complaining when the fish that comes to the net is a Salmon.

During the summer months I also run trips on the Cowlitz and Lewis Rivers for summer steelhead.  If you’re interested in fishing this SW Washington river and would like to know more, visit my Cowlitz River Steelhead Fishing page.

Contact me with any questions about Columbia River steelhead fishing or to book a trip.