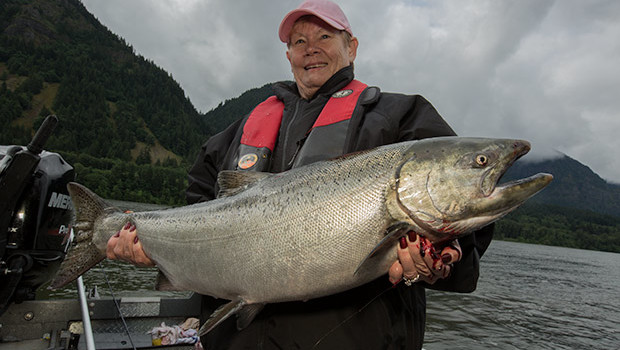 Some of you may know that we received an extension on the Columbia River to continue to fish for Spring Salmon. I wasn’t terribly excited about the option as I spend my May on the Willamette fishing for Spring Salmon and these sort of seasons aren’t usually that productive. In this case however, it did turn out to be a blessing as Willamette water temperatures coupled with a mediocre run caused me to look elsewhere for my beloved clients.

The Columbia River Spring Chinook run would by and large be considered long gone by the end of May, but in thinking back to my days of Summer Salmon fishing up in the Bonneville area, I could remember even in June a remnant of the run that often constituted 50% of our catch during the June 16-30 seasons. We had some fun days on the combination of 10-12 pound Spring Salmon and the 18-35 pound Summer fish. The weather was good, the fishing was alright and the scenery- out of this world. So with it still being May and a few decent reports, I figured it would be worthwhile to at least check it out. 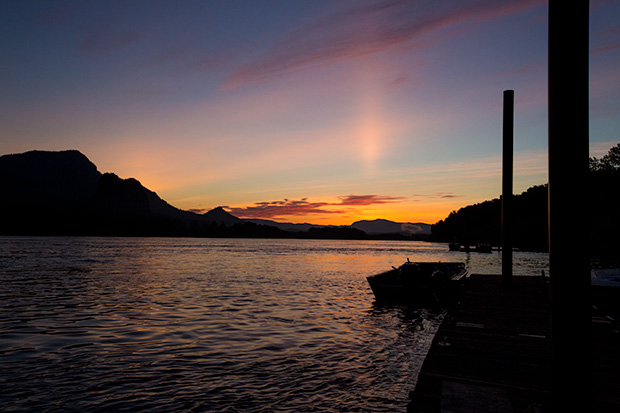 So about a week ago I made my way back to the Fishery which is located just below Bonneville Dam. The folks that own the facility have had to endure some unfortunate management decisions since the hay days of the early 2000’s and it was great to see the place again. The water was roaring out of the dam. In fact I don’t remember ever seeing that much volume which amounted to over 400,000 cfs. It’s a combination of snow melt and spill, which is all good in their own rights. A good snow pack helps us with cooler temps in the fall and spill over the dams has been the single greatest improvement in Columbia River fish management.

My first couple days on the river had me working hard to figure things out. How deep, fast and locating the routes that the fish were consistently using. Initially there were lots of bites, adults and loads of jacks. The jacks were all about 23″ and weighed several pounds. Great BBQ fish. Nobody complained. The adults were your typical Spring Salmon running between 8-14 pounds. Some hatchery fish to keep and some wild fish that we had to through back. All it all it was a good choice to be in the Gorge and fishing was good enough to keep coming back.

This past week, the jack numbers have began to diminish with a higher percentage of adults around. The big difference has been the type of adult that has decided to make an appearance. In that this is a Spring Chinook season and the Summer Chinook opener is still 3 weeks away I guess most people think they’re suppose to be catching the smaller Spring variety of Salmon. There’s no doubt in my mind however, that we’ve got some June Hogs that have already made their way into the area. 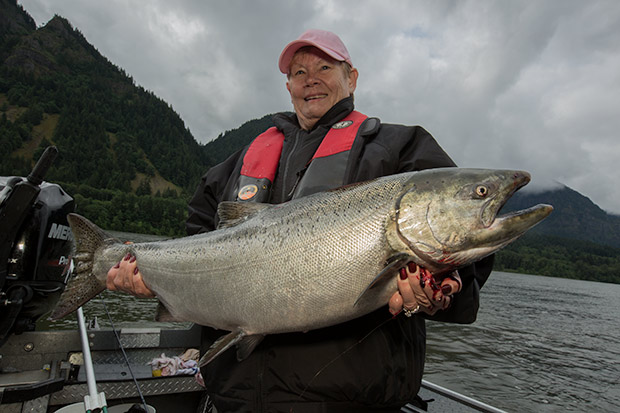 June Hogs, aka Summer Chinook are famous for their size. Their large bodies were likely necessary to move the larger rock of their native waters during spawning. Summer Salmon were all but gone until the tribes began reintroduction efforts about 10 years ago. These fish are noticeably different from the very moment they take a rod down. Summers, with their large bodies combined with strong Columbia River currents can have 300 feet of line ripped off my Shimano Tekota Line Counters in no time. Its impressive strength and quite frankly, their capabilities give me anxiety at times.

Here’s the equipment checklist for the fishery:

So over the course of the next five weeks, with the exception of a few stints in Tillamook to enjoy another type of Spring Chinook, I’ll be hanging out on the Columbia catching Spring and Summer Chinook. Feel free to give me a call at 503.680.6809 or drop me an email if you’d like to get out.