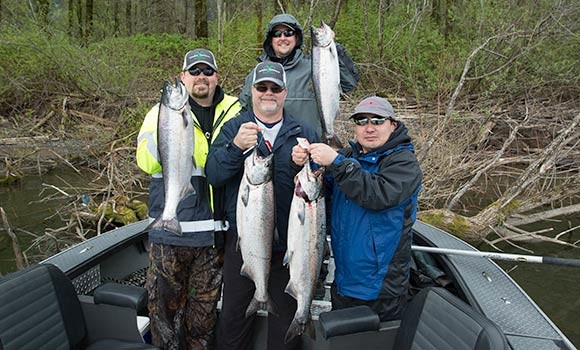 With just 5 days left in the 2015 Columbia River Spring Chinook season below Bonneville Dam, now is the time to go.

Fishing has picked up significantly in the past week and folks are finding fish from top to bottom. With that being said, each area has it’s ups and downs and may fish better or worse from one day to the next, but the overall trend is good and most fishermen are getting their chances.

The trollers are really taking over what used to be an anchor fishery. Most of the guys I know in the lower river now troll where everyone used to anchor and fish Kwikfish. I speak regularly with Scott Weedman of 3 Rivers Marine and although he thinks it “could be better”, 6-8 chances per day are typical of what the lower river is kicking out at this point. According to Scott, low water is when it’s happening and when I talked to him this morning he was looking to make a move and get into his low water honey hole. This afternoon I received a text with the following photo, so although “things could be better”, fishing turned out pretty good for Scott’s boat. 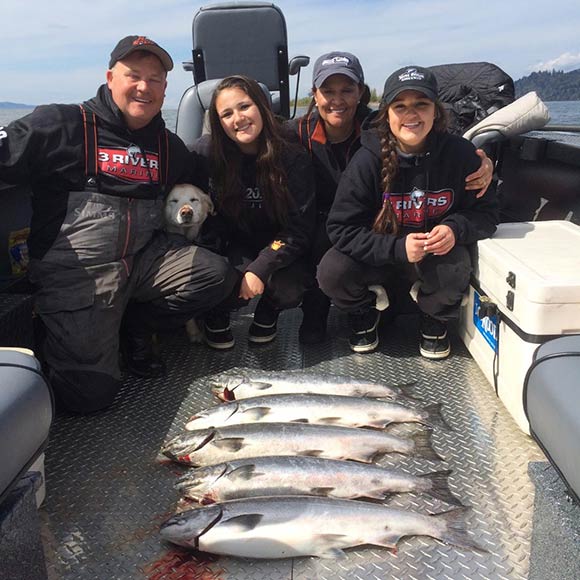 A lot of Spring Chinook fishermen neglect these sort of trends, but know that certain areas throughout the river produce at different times of the tide. Start to piece these trends together and you’re going to noticeably increase your success rate.

The Columbia River around Rainier/Longview

There are still a lot of guys in this section that still sit on the hook and let the wiggleys do their thing. Although the week started off with some pretty good fishing, things have slowly dropped off. I talked to Nate at Nate’s Bait and he said on Saturday that for 100 rods at Dibblee Beach, only 4 fish were caught. “It was good early in the week and fell on it’s face”, according to Nate.

This report was consistent with what I heard from the boats, so it looks like this section of the Columbia River is in need of a new shot of fish. Things change all the time at this stage of the run, so if you’re not happy with your day, just wait til tomorrow!

The Columbia River around Portland

The Portland area has seen some really good fishing to date, but when many could fish this weekend, it sucked. I talked to fellow guide and G. Loomis Pro Tom Burgess on yesterdays show and according to Tom, things have been pretty consistent for those that have a decent herring game. You can listen to that segment here: Columbia River Spring Chinook Report on the NW Outdoor Show . 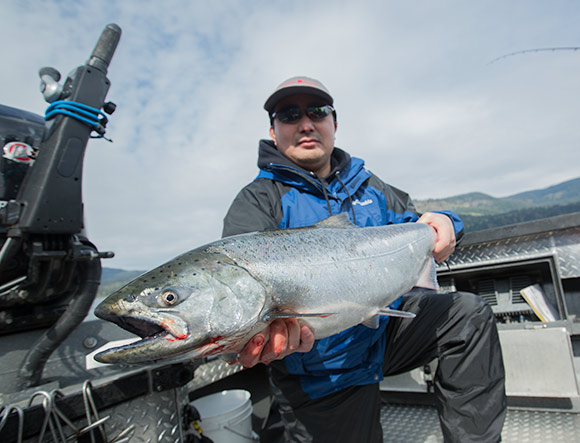 I was able to get out this week with customers and put the screws to a bunch of fish. I’ve fished a variety of types of baits and set ups, but found a 16″ dropper with or without a fish flash and either a straight Herring Spice laced bait or Herring Spice with Anise performed the best. I tried Herring Spice with Garlic and couldn’t get the Springers to go on it. In years past Garlic has worked well for me, but things change and could again tomorrow. I run G. Loomis SAR 1265 and Shimano Tekota 300 LC reels with #65 PowerPro and #30 Seaguar topshot. I run Gamakatsu hooks and use a couple different rolls that include various 2 and 3 hook configurations.

We should have a decent week ahead with the calendar starting to become favorable to even greater numbers in the system. Tuesday we’ve got a Compact Meeting to review the run results to this point and make necessary adjustments. I’ll keep you posted on what’s up as I hear it.