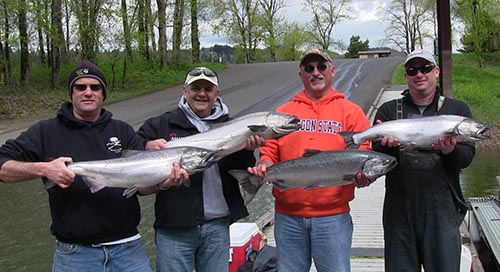 A group of my customers with hands full of fun from last year’s season.

Many of my customers have been waiting for this years forecast and subsequent seasons to be set by Oregon’s and Washington’s Commissions.  Of course booking trips without the season set for the Columbia makes things a bit difficult, so it’s good to see what we can count on going into this years spring season.

Before I copy and paste the news release, I want to set some of the expectations for those of you that aren’t familliar with the fishery.

Although fisheries managers say it’s open now, it doesn’t mean that fishing even borderlines good.  I would say at this point you’re looking at 120 hours per fish.  So please don’t entertain it.  Should you have that kind of time, Meals on Wheels is looking for help this time of year 😉  The last two weeks of the season is when you want to go.  Some years it starts a bit earlier, but don’t count on it.  Book during the last two weeks and you’re in the game.  How good it gets will depend on flows and how many fish end up showing.

So, with the two days of commercial closures and Easter Sunday, I only have 12 days worth of fishing for Columbia River Spring Chinook season.  If you’re interested in getting on the Big C this year, book earlier rather than later.   All of our fishing will be done with in 20 minutes of Portland, so ease of access is sure nice.  Let me know if you have any questions as I’m happy to help.

Should you prefer to fish the Willametter for Springers, don’t despair, we’ll be on it as soon as the Columbia closes on April 5.

After three years of strong returns, fishery managers based harvest guidelines for this year’s spring chinook season on a projected run of 141,400 upriver fish, about 25 percent below the 10-year average. Approximately 203,000 fish destined for areas above Bonneville Dam returned to the Columbia last year.  This year’s initial catch guideline for the recreational spring chinook fishery will allow anglers fishing below the dam to catch up to 5,000 hatchery-reared upriver chinook before the run forecast is updated in May. Another 670 adult fish will be reserved for anglers fishing between Bonneville Dam and the Washington/Oregon state line, 17 miles upriver from McNary Dam.  Although spring chinook returning to the Willamette, Cowlitz and other rivers below Bonneville Dam also contribute to the fishery, upriver fish make up the bulk of the catch. Under last year’s guidelines, anglers fishing below the dam caught 10,160 upriver spring chinook, along with 3,175 returning to tributaries of the lower Columbia River.  The spring chinook fishery approved today is scheduled to run through April 5, but could be extended if enough fish are still available under the harvest guideline, said Ron Roler, Columbia River policy manager for the Washington Department of Fish and Wildlife (WDFW).

“Salmon returns are highly variable, and we’ll have a better idea what the season holds once the bulk of the run starts moving upriver,” Roler said. “Although the preseason forecast is smaller than in recent years, it is still twice as large as those we saw in the 1990s.”

As in years past, anglers may retain hatchery-reared spring chinook marked with a clipped adipose fin. Any unmarked wild spring chinook – some of which are listed for protection under the federal Endangered Species Act – must be released unharmed.To facilitate the release of wild fish, anglers fishing for salmon, steelhead and cutthroat trout are now required to use barbless hooks on the mainstem Columbia River downstream of the Washington/Oregon state line, 17 miles upriver from McNary Dam.