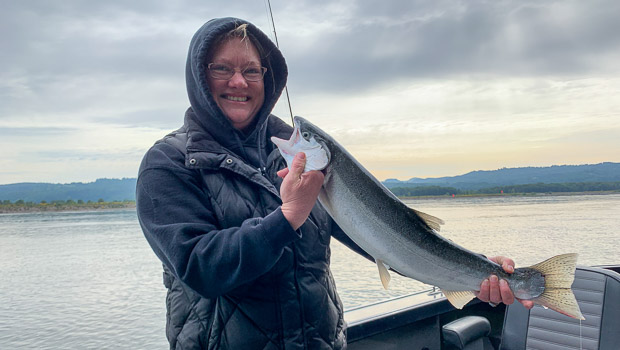 Memorial Day is known for kicking off the summer fishing season in the Pacific Northwest, and this year was no different. Actually, this year it’s a little more exciting as things are opening back up and we’re looking forward to being back to more of our full routine. Fishing on the Columbia River did not disappoint over the weekend. The weather was beautiful and we enjoyed some active days fishing for steelhead with their favorite combination of coonshrimp and a spin n glo.

The Steelhead season is just getting started and we plan to be fishing through July, first on the Columbia River and then following the fish up the Lewis River later in the season. This year ODFW is allowing retention of Sockeye Salmon as well as Steelhead on the Columbia River. Guided fishing trips for multiple species can make for some fun times on the water. If that’s not enough or you would like to pit yourself against some larger fish, we can include some catch and release Sturgeon fishing during your day on the Columbia River.

There’s lots of fishing to be done in the Portland area as we finish up May and head into the months ahead. We’re adjusting things as needed based on governmental decisions and are excited to be out on the water.

Please contact us with any questions or to book your trip. We’re always happy to help.