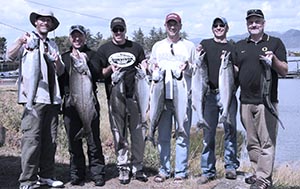 A great mess of Salmon from the 2012 season on the Columbia River.

Most of the email alerts that I get aren’t much.  A sucker fish had a baby.  Manatee falls in love with whale, etc.  Typical headlines that are quickly jettisoned into my cyber trash can.  But occasionally such a release actually means something like the one I got last week on this year’s Columbia River Fall Chinook run.  Yes, I’ll take that and I know most of you want to know as well…..

So in short, we can expect an overall increase of about 10% to this years fishery.  Decent enough for sure and going in the right direction.  Of the 6 stocks that make up the Columbia River Fall Chinook run, the Up River Bright component seems to be the one making up for most of the gains.  Last years forecast of 353k URB’s and 298k actual is now being compared to a forecasted run of 432k URB’s for 2013.  These are great numbers and nice to see as we’ll spend nearly two months fishing for these very fish starting in August.

The lone miss on the bright overall forecast was the Lower River Wild stocks known as Tule’s.  Although not the best table fare, Tule’s are an important contributor as they dictate impacts for sportfishermen.  The more Tule’s that return, the more sportfishermen are allowed to fish.

Overall, I’m pleased and looking forward to some great fishing with old friends and new.  Let me know if you’d like to get on the books and I’d be glad to help you understand the run timing and tides that might effect your day of fishing.  I’ll be fishing Buoy 10 in Astoria in August and then fishing the Klickitat for Fall Chinook in September.

For those of you into details, here they are:

Washington Department of Fish and Wildlife